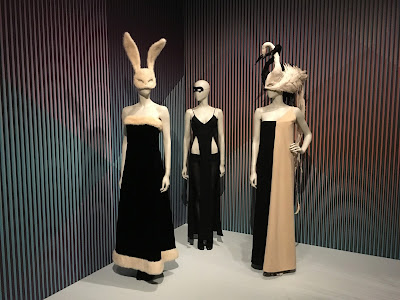 The Mod New York: Fashion Takes a Trip exhibition, at the Museum of the City of New York, left me disappointed.  I guess I was envisioning more of an English version of mod, or rather my English version of mod, but this was another mod entirely.  Encompassing a wider time-frame, and a broader range of cultural trends, this Mod felt faded and inert. Fossilized. Granted I was a small kid during the English mod heyday, with a child's distorted sense of things, but even in the primary school playground I felt the excitement of the era.  Older kids would corner you and demand to know if you were a mod or a rocker (at six or seven years old I knew my camp).  The crackly sound of Radio Caroline buzzed from my older siblings' transistor radios, and in the early to mid-60's, an hour away from Liverpool, those of us young enough to get it basked in the glow of the city's reputation.  Yes there was a world of high-end fashion and art, high-end clubs and juicy tabloid scandals somewhere in the distance, but even as a kid I knew mod was really lived in the music & the street culture of towns and cities all over the country.

So this mostly 1% couture version of Mod had none of the bite or the fun or the energy I'd hoped for, and most of the clothes & designers and celebrities in no way met my biased expectations.  Jackie O.? Audrey Hepburn, Oleg Cassini, Adolfo?  Mod?  Oh come now. The parameters were all wrong. And even the Campbells & Op-Art minis lost their zing in this fusty gathering.  It might have been something to do with the presentation - the dimly lit space and the blank-faced mannequins, or maybe the lack of any music to liven things up but really, I think it was the smell of money.

Still, I had to enjoy the Black & White Ball clothes, especially that Halston rabbit ensemble worn by Candice Bergen, who later expressed regret that she had attended the party "while there was war and suffering in the world."  Also the bolder, fresher African Jazz Art Society and Studios Grandassa Models photographed by Kwame Brathwaite in 1962. 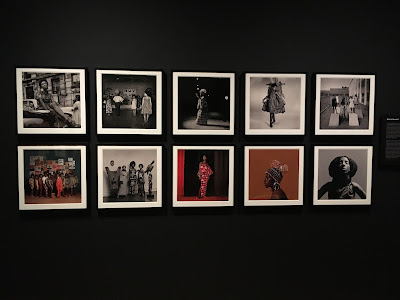 But there were surprisingly few things to covet.  Visiting the Alexander McQueen show several years back, I was wild for his clothes' grand, savage beauty, but this was tamer stuff by far.  If I had to pick something I guess it would be the Courrèges Paris Hyperbole, a slinky looking crinkly vinyl on cotton & spandex in black.  It had a faint edge. 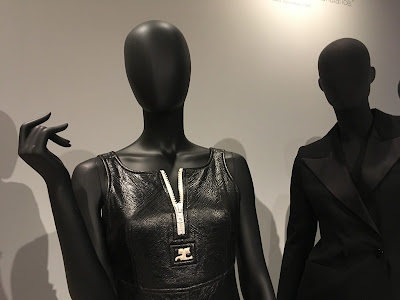 Despite my negative views, I love the MCNY.  Right now I'd recommend another show there: Art in the Open: Fifty Years of Public Art in New York.
Posted by onemorefoldedsunset at Saturday, January 13, 2018