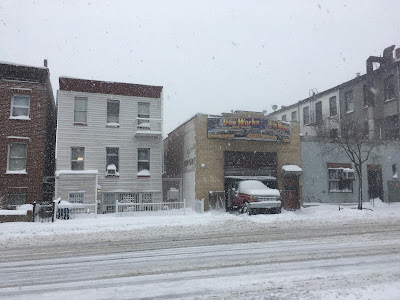 Trashed: Inside the Deadly World of Private Garbage Collection (ProPublica)
Waste removal is one of the most dangerous jobs in the country. On the darkened streets of New York City, it’s a race for survival.

Erica Garner, Daughter of Police-Brutality Victim Eric Garner, Dead at 27 (The Root)
Erica Garner was indeed a force to be reckoned with, occupying space and speaking out loudly against police brutality ever since her father’s July 2014 death. She was unafraid, unabashed and unapologetic about what it was she was fighting for.

The Wall of Love Outside a Jail (NY Times)
Maria stood outside the Metropolitan Detention Center in Sunset Park, Brooklyn, on a recent evening, looking up. The jail loomed above, a concrete bulwark more than a dozen stories high and lined in narrow windows. Behind one of them was her husband. (But NY Times, don't call the waterfront adjacent to Industry City an area "known as Industry City.")

550-Seat Restaurant Overlooking Gowanus Canal To Open In Spring (Gowanus Patch)
"I love the area and I think our canal should be Venice," said Alex Donskoi, a furniture company owner working on the restaurant. "It has all the potential to be there and it's going to get there. It's not that far away."

Medina Mohammed: From an East Flatbush Childhood to the Captain’s Seat (Waterfront Alliance)
Meet Medina Mohammed, a 27-year-old first officer with Hornblower Cruises and Events who hails from East Flatbush, Brooklyn. We caught up with Medina when she wasn’t out on the water to hear about her journey.

Taking Out the Trash? That’s Still a Man’s Job, Even for the Liberal Coastal Elite (NY Times)
Clearly not fitting this NY Times demographic, I'm proud to say I have no problem shoveling snow or taking out the trash.

Stories of the Nature of Cities 2099 - Prize for Urban Flash Fiction.  Entry details at The Nature of Cities
Let’s imagine. What are the stories of people and nature in cities in 2099? What will cities be like to live in? Are they lush and green, verdant and biodiverse? What will cities look like; be made of? How will they be designed and powered? Will they be tall, short, dense, under ground or under water? What of public spaces? Social organization? Mobility? Government? Sustainability and food? Wildlife? Climate change and resilience? Poverty, consumption, wealth, and justice? How will we interact and relate to one another and the natural world? What sort of stories can we tell about our communities and the spaces that will shape them?

Radio Trottoir (Walkers in the City)
My Dutch friend told me that something distinctive about New York is the way we all talk to each other. New York, unlike Amsterdam, she said, still has its Radio Trottoir—its pavement radio—meaning that we find out a lot from overhearing talk on the street. I had never thought about that, although it rang true as soon as she said it.

Nature's little sanitation engineer visits Tompkins Square (Laura Goggin Photography)
The big news around Tompkins Square recently has been this opossum, who mysteriously appeared in the park a couple of weeks ago...

Gerritsen Beach - Brooklyn's forgotten Levitown (CityLab)
Isolated on the edge of the metropolis, linked by a single bus line, Gerritsen Beach developed a social fabric as tightly knit as its streets. It had its own Chamber of Commerce, Civic Association, and Citizens Protective Committee, a Lily of the Valley Garden Club—even its own elected “unofficials,” including a mayor and commissioners of parks and public welfare. When the city failed to fix a massive sewage backup in Shellbank Creek, citizens organized a pick-and-shovel army to cut a channel across the Plum Island sandbar to Rockaway Inlet, allowing tidal action to flush the waters.

History of Fountain Avenue Landfill, site of Gov. Cuomo's proposed State Park. (Hidden Waters Blog)
In an unexpected start for 2018, New York Governor Andrew Cuomo announced yesterday a proposal to create a 407-acre State Park in Brooklyn. My first reaction was in line with the city’s independent spirit: “Do we really need more State Parks, state troopers and state tourism road signs within the city’s borders?” My second reaction was, “Here we go again, the Governor and the Mayor’s rivalry is now a literal turf war with a State Park inside the city.” My third and final reaction was, “Where in Brooklyn is there a 407-acre expanse of undeveloped land that can become a park?”


Posted by onemorefoldedsunset at Saturday, January 06, 2018