The steady drip, drip, drip of the city as the snow and ice started to melt away.  It was finally time to start shedding layers, but from an instinct acquired over the last fortnight, I still overdressed.  No matter.  How good it felt to walk, and to feel the blood pumping, thawing out my brain and waking me up after the deep freeze.  Instead of looking down, to better navigate the slushy, icy intersections, I found myself looking up, at small amendments to the streetscape, and at small, longtime markers I had either taken for granted or never noticed before.

A little glamor has disappeared at Fifth & 21st.  The old Tuxedo Den signs have gone, along with the astonishingly narrow-waisted dapper gent in top hat & tux. 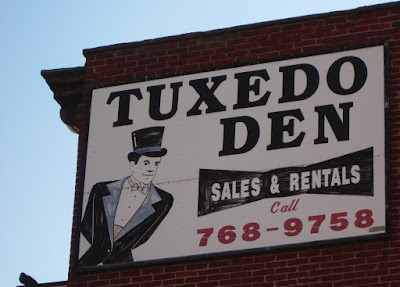 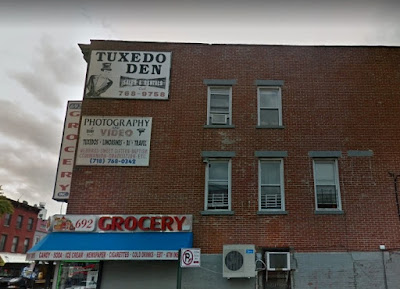 In their place, there's a Marksman (We Do It All!) Construction sign.  Marksmen has new premises just down the block. 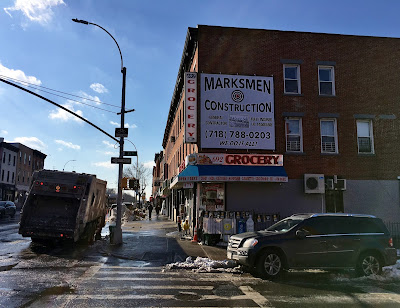 At Fourth & 23rd, across from the Jurek funeral home, I saw a detail at 722 that I hadn't paid attention to before - "Hanover" inscribed on top of the corner facade. It's hard to date the building precisely, but Hyde maps show it to have been built between 1898 and 1903, when the area's population was booming, and all around Fourth there was a rush of construction in anticipation of the BMT subway line. A lot of buildings from this era were given names - some vaguely baronial, like Hampton Court, and some sentimental, like Mildred and her sister Genevieve.  Hanover has a stout, burgher-ish ring to it.

I don't know what business occupied the ground floor of 722 originally.  A 1949 ad in the Brooklyn Eagle lists an ice cream parlor & luncheonette for sale, and just a couple of years later the paper shows the Clavin Funeral Home at this address.  There are still plenty of funeral homes round here, perhaps because of their proximity to Green-Wood cemetery.  In earlier times the area was also dense with monument works and florists.  Death was big business. 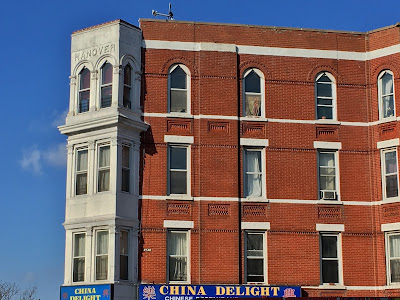 At Fourth and 22nd, no. 698 bears the name & year of its builder, P. Capo, 1921. At first I thought this was a brick building, but the sides of the building are aluminum or vinyl sided.  In 1916 it's shown as wooden, but I'm guessing the Capos added this facade. It certainly has a 20's look. The name up top shows a nice touch of family pride. 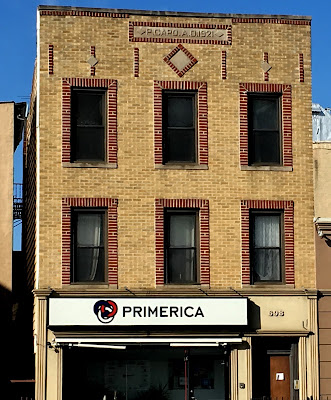 An Eagle search for 698 reveals the usual motley fragments of residential life.  In 1900 former tenants of the building were caught up in a love triangle, when George Crotty, an electrician, was shot to death by a fellow tenant, Edward Leasure, who Crotty believed was paying too much attention to his wife.  And in 1906 a midwife living at 698 was tried for performing a "criminal operation."

Other tenants in the building are seen looking for work. This ad suggests either a carefree or a desperate spirit.  I suspect the latter.

Eventually the Capos make brief appearances. In 1928 Agnes Capo (45) and Marie Capo (25) are injured in a car accident.  Asunta Capo and Antonio Greco purchase a marriage license in 1937.  Then the family goes out of sight again.

You can walk a street or an avenue hundreds or even thousands of times without registering peripheral details.  It's all a question of light, angle, and level of attention. Had I really never noticed this faded ad past 20th Street?  Try as I might, I couldn't figure the sign out.  Here's a photo that I darkened to try and get the lettering into better focus.  It didn't help much. 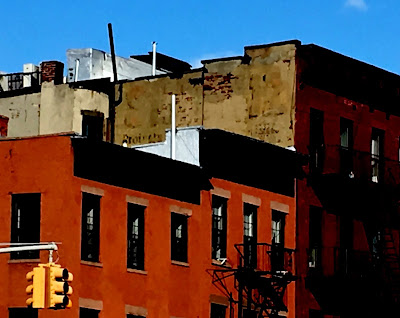 Our random lives fade in and out of focus.  Who notices the clues we leave behind?

Posted by onemorefoldedsunset at Tuesday, January 09, 2018