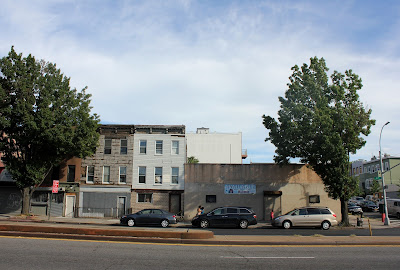 Last week The Real Deal announced that California-based firm CGI Strategies has filed plans for a new, eleven story, 73 unit building at Fourth & 18th. It will include 5,000 sq. ft. of retail, a cellar recreation space, and bike parking. There is no indication as yet as to whether this will be a rental or condo development, but according to the plans there will be no inclusionary housing component.

This news hardly came as a surprise, as we've been watching the buy-ups of properties at this corner for some time. These included 609 Fourth, home to bar/cafe Supercollider, which closed in April shortly before the sale of the building was finalized.  We didn't know the buyer as CGI though, only under its LLC moniker - the charmingly titled South Slope Bliss.

While many of us watch with indignation as the luxury development blight makes its way south along Fourth, apparently some rejoice at its incursion. Yesterday I spoke with a local businessman who was pleased with the new-look avenue.  He didn't care how much the rents for these new units were - they could be $10,000 a month as far as he was concerned.  The newer, wealthier residents were clean, he claimed, and cared about the community.  As far as he was concerned, a mixed-income neighborhood was something he'd be happy to be rid of - he was all for paying off lower-income residents to get out for good. None of them worked, he said - they were all too lazy.  There was no common ground on the sidewalk we stood on, though I looked for even the smallest patch of concrete we might share. After twenty minutes or so of his relentless rhetoric, I moved on.


Posted by onemorefoldedsunset at Monday, September 12, 2016