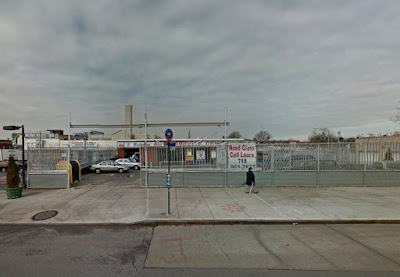 Another auto business lot is up for sale. S. Batrouni, at 740 Fifth (24th), is on the market at $4.25M "as is". The repair shop was formerly a Mobil Gas station, and the site was once part of Pitbladdo Monument Works, one of the many stonemason & florist businesses that flourished in the nineteenth and early twentieth century.  A couple of years ago I noticed excavation in the forecourt, and what looked like gas tank removal, and I guessed a sale was imminent.  As is commonplace by now, I've been unable to locate better pictures of Batrouni in my carelessly kept photo archives - will keep searching.  Hence the grim Google shot above. All I could find of my own was one of this car under wraps on the premises last year.  Ominous skies. 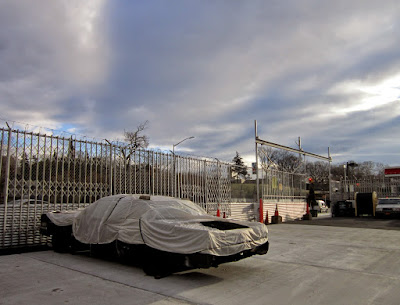 Batrouni is right next to another auto business/gas station, and across 25th is the Weir greenhouse, now owned by Green-Wood Cemetery, & still under renovation.  At nearby 734/6 a six-story Boaz Gilad residential development is on the way (plans were approved this spring).  The warehouse at this address has recently been demolished. 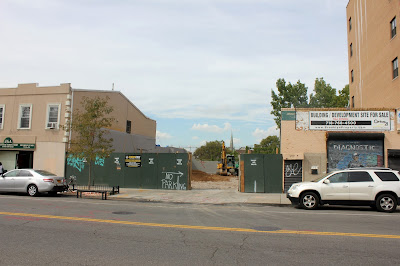 724 Fifth, on the site of the old White Eagle Tavern, appears ready for occupancy - not sure if any apartments are listed yet. In the trash-filled back yard of the adjoining building, I saw a bevy of lively rats doing their thing. 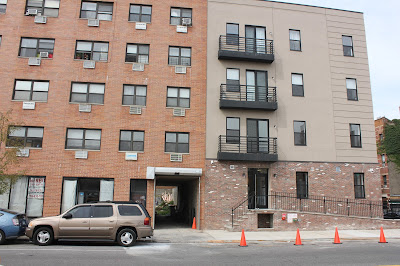 It's impossible to know what will replace Batrouni, but one can be pretty certain it won't be another auto business.  There's plenty of boring activity (the excavation kind) going on right now, as those hot corner sites continue to be in high demand.  Viz.: 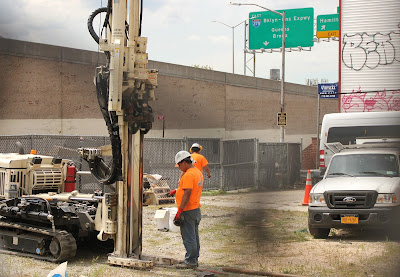 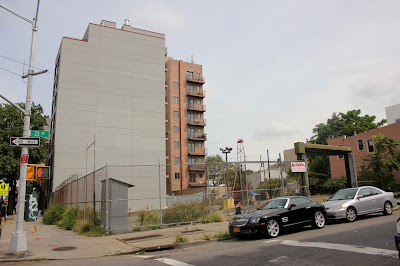 Posted by onemorefoldedsunset at Thursday, September 29, 2016