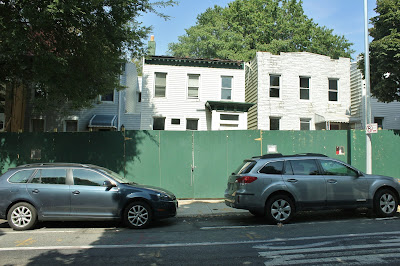 I walked down there today to take a last look at the three houses, all of them now confined by those familiar green construction fences.  While there's outrage up the Slope about a hospital enlargement, or the contextual looks of a condo conversion (the latter averted - phew!) it's pretty much silence when it comes to the loss of older, working & lower middle class homes, the small wooden buildings that were here when the park blocks were merely empty parcels.  Here there's value too, both in the modest beauty of the buildings themselves & in the wealth of stories they contain. Stories of families building up the city with the nuts and bolts of hard, physical labor: of artisans, tradesmen, factory hands and sailors, of carriage drivers, stevedores, tinsmiths & seamstresses. With each house that's gone, we're reminded less and less of who went here before, and why it matters.


Posted by onemorefoldedsunset at Friday, September 09, 2016