The Ennis Playground (11th/12th between Second & Third) is likely to be getting a major upgrade. The Parks Department submitted plans to Community Board 6 park committee last week, and the committee will vote on the proposal after a public comment period (Gowanus Patch).   The plans include artificial turf, gardens, better drainage, & upgraded ball courts & playground equipment. According to DNAinfo, the Parks Department stated that construction on the $2.5M renovation would not be expected to begin until 2018, & the playground would be closed for a year during the work.

The wait will be worth it, said Community Board 6 parks committee chair Glenn Kelly.
"It's magnificent," Kelly said of the plan. "They really packed a lot of features into a pretty small space that I think will serve the community well."
The existing park is a "drab and boring" space that works as a quick lunch break spot for local workers but doesn't beckon to families with children or seniors, Kelly said. The renovation will turn the park into more of a neighborhood amenity, he said.
"I can imagine that many people in the community didn't go this park because it wasn't very inviting," Kelly said. "This is going to be their park now." (DNAinfo)

The playground is on the stark side, but I see it enjoyed by children & adults alike, albeit fairly lightly, and I've seen kids having a ball with all that space (almost) to themselves.  Its light use might be more a consequence of its location (next to the sanitation garage & a busy manufacturing corridor) rather than of its appearance.  It's a nice little playground, and some upgrades will be great, but even landscaping is not going to make its situation bucolic. DNA notes that the Gowanus Alliance is hoping to work with the Sanitation Department to rid the sidewalk of parked sanitation trucks, which "are smelly and attract rats," but it will be hard to please everyone in this rapidly changing neighborhood, and the trucks, when resting at their base, don't have many options in terms of parking, without blocking street traffic altogether. The sanmen are not going anywhere, and are much needed. 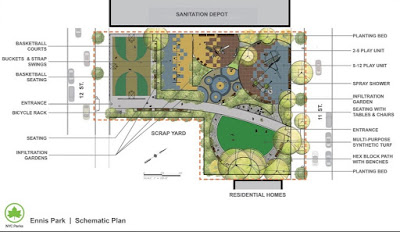 For the past year, Ennis Playground was home to Michael Clyde Johnson's temporary "lounge" & planting "parklet", which was funded by Brad Lander.

Posted by onemorefoldedsunset at Monday, September 26, 2016