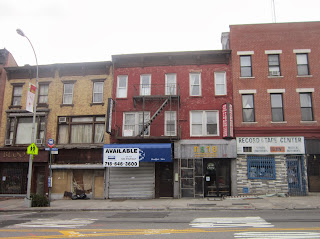 This morning, while I was waiting for the bus, a van drew up and a couple of guys got out.   They started taking down a for lease sign at 433 Fifth (second from the left, above).  My bus arrived.  By the time I came back this way, the same sign had been put back up, this time at the building next to it, 435.  435 was home to a Cemiteria that seemed about to open late last year, but never quite made it.  Farther along, I saw that the awning was down at the Record & Tape Center.  Blown down overnight?  In early 2011 I heard they'd signed a four year lease, so I think they're good for at least another year, but who knows?  Before they signed the lease there was talk of a move to smaller premises at 433.  I hope things are OK. 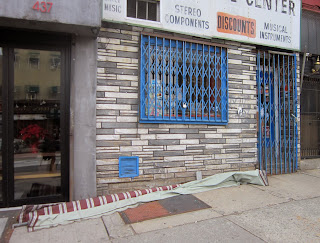 Update: 1/27/14: A week later, the awning is still on the sidewalk in front of a shuttered store. The guys in the corner store didn't have any news about it.
Posted by onemorefoldedsunset at Monday, January 20, 2014