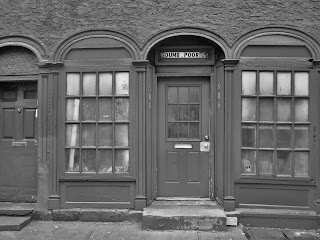 This is one of a quartet of early nineteenth century buildings - 502-508 Canal Street - far on the West Side. 506 (above) was built in 1826, and you can read more about its history here, in the landmark designation report of 1998.  In the 1990s a pottery studio, Pottery in Soho, operated out of 506, but I have no idea about the meaning of the mysterious sign above its door today. 502 - 506 are all owned by Ponte Equities, and 502 & 504 in particular have suffered from serious neglect over the years. 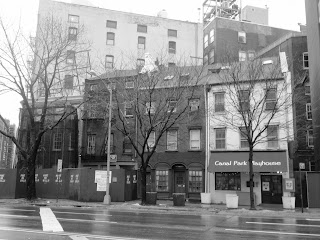 The sign haunts me, and reminds me of lines from the poem National Trust, by Tony Harrison:

The dumb go down in history and disappear
and not one gentleman's been brought to book:

(Cornish-)
'the tongueless man gets his land took.'

An ironic reminder of course, given its uber-wealthy location, but fitting enough for our city today.

Posted by onemorefoldedsunset at Tuesday, January 14, 2014

I have walked by there countless times and never noticed the sign. Great find!

This was bugging me, so I went and looked at my photo archives. Sure enough, I took a pic last January and the sign above the door says "Plumb Door" and you can see that it's covering up the other sign. This would explain why I never noticed it. Now I'm really curious about why it's there, why it was covered up, and then uncovered.

I looked at your photo - that really is strange. Anything more than an odd play on words? Maybe you can investigate!

This building has a remarkable history:

Nothing about that sign...it seems to be recent. I found another photo from 2010 that shows yet another sign above the door:

I've since learned that Plumb Door was a business.

Wow, that was quick. Yes, the history is amazing. The landmarking report has a lot of interesting stuff, including old photographs. I also read accounts by people who'd lived in these houses. I could certainly fantasize about living in 506.
I'll check out your new links!