Visions of Gowanus Dance in My Head 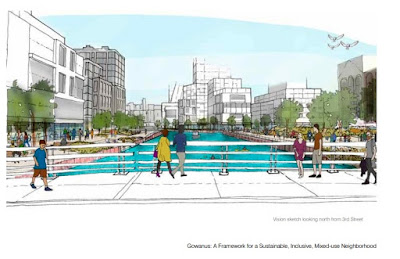 You can read the new Gowanus Neighborhood Planning Study here

Rezoning will certainly accelerate the change.  With rezoning, Gowanus will see a massive increase in housing, much of it luxury development, albeit with a higher, much welcomed, MIH component. Personally, if there's going to be new housing, I'd like to see it all affordable, but this is an unrealistic dream these days.  In the planning study, it's proposed that Fourth Avenue will be upzoned, along with (at last) MIH requirements.  Fourth Avenue has changed beyond recognition in the last decade, so in some sense upzoning makes little difference now, but oh what a lost opportunity in that decade, with a mere handful of new affordable apartments on Fourth thus far.  There should have been hundreds, thousands.  You can't help despairing over a city that to most of us seems like it functions only in the pocket of developers. There is one piece of housing good news though. On city-owned land at Smith & 5th - site of the old Slab City shanty town  - there will be mixed-use construction with 100% affordable housing.  Also good is the emphasis on improving public housing facilities & resources, tenant protection, transportation, and climate resiliency.  But when you think about it, these kinds of improvements should be taking place irrespective of any rezoning.  Esssential services are padding here.

And of course, Gowanus sits in a flood zone, and a highly polluted one at that.  Does it really makes sense to build new housing here?  And with rezoning, what's the balance of what's gained and what's lost?  I'd like to see increased quotas of affordability in any new housing. I'd also like to see specific requirements for the protection of existing industrial jobs and the development of new ones, with fair wage blue-collar jobs in skilled manufacturing trades.

Renderings are by nature bland affairs, but the one above, with its little retail & canal-side plazas,  is particularly chilly.  It's a tame, controlled, vision of the future. How sad it looks. There may be a canal - just look at its Caribbean-blue waters -  but Gowanus has vanished entirely.  I'd like the place to keep its older, wilder style, its watery dead ends & its ragged lots, its low streets and big skies, its warehouse industries of glass and tile and scrap. But we're well past the tipping point by now.  Where does it go next, and at what speed?


Posted by onemorefoldedsunset at Wednesday, June 06, 2018