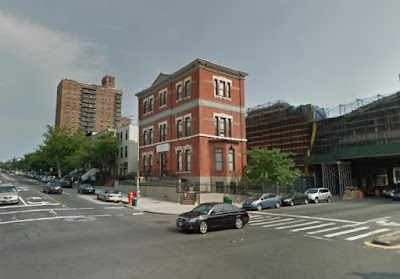 The building at the SE corner of Fourth Avenue & 9th Street is to be demolished.  It was last occupied by Good Shepherd Services, & was apparently sold earlier this year, though no sale is evident on ACRIS.  437-441 Fourth was built in 1875 by George L.Morse, whose work includes the landmarked Old First Brooklyn Reformed Church. The Fourth Avenue building operated as the clubhouse for the Democrats of the 22nd Ward:

Judge John Delmar was the patron saint of this Democratic Ward club. He was a very influential ward “boss” ostensibly under the control of the powerful Democratic Boss of Brooklyn at the time, Hugh McLaughlin. He controlled not only the 22nd Ward, but also the 8th, and had enough independence and nerve to buck McLaughlin whenever possible; defying him at every turn, until McLaughlin finally shut him up by making him County Clerk, the third highest position in the city. Delmar used his appointment to get rich and then retired to Manhattan to live the good life. But while he was still a powerful figure in the 22nd Ward, his followers named their club after him.
Suzanne Spellen (aka Montrose Morris) - Brownstoner

Spellen describes the club's lavish accommodation, which included a banqueting hall, library and game rooms.  The property was later sold to St Thomas Aquinas, and then occupied by the Sisters of the Good Shepherd.  For the entire Spellen piece on its history, read here.

No plans for a new building have been filed as yet.  The owner is listed as Joseph Banda/Vibes of One LLC, with a Borough Park address.


Update - 8/22:  The building was sold for $15.5 million, and plans have been filed for an eleven-story, mixed-use building with 63 residential units. No provision for inclusionary housing is indicated in the plans but a library, recreation space & bicycle storage are on the cards.  You can read more about the sale & plans here.

I'm sorry to see Good Shepherd Services leave Fourth & 9th. You can't blame them for making a financially expedient decision, but when an area gets too expensive to sustain a diverse range of social programming & a diverse range of residents, community at every level suffers.  Supportive housing or condos?  I know which I'd prefer. I hope the money from the sale can be put to good use in the agency's other valuable programs, several of which operate nearby, in Park Slope, Red Hook & Gowanus.
Posted by onemorefoldedsunset at Friday, June 15, 2018