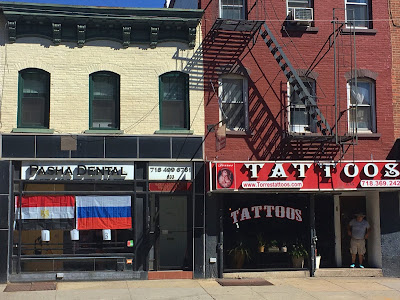 I love the excitement when the World Cup swings around.  All over the city our hearts fly back to our countries of origin.  A mixture of homesickness and national pride courses through our blood; in bars and living rooms & at workplace lunches we're fierce with excitement.  Here we all are, with one foot in the city & the other back There, & aren't our multitudes of dual identities the grandest thing?  And don't we do it well, these double lives we lead, miraculously (more or less) harmonious and tolerant?  And aren't we the best of the country, here in our city state, as the nation slips, day by day, deeper into hatred and isolation?

Still, I wasn't expecting this one, on Fifth.  Russia 3, Egypt 1.  It tested my sentimental mood. Given my own team's lackluster chances (1966 was long, long ago) I'll be ready to cheer on plenty of other teams, especially the favorites in the neighborhood. But there are exceptions.

The New Yorker saw the game..

It was reported before kickoff that the disgraced former FIFA president, Sepp Blatter, who is banned from soccer for six years and widely seen as a symbol of its institutional corruption, would watch as Putin’s guest. During the game, video footage shared on Twitter seemed to show Blatter arriving in Moscow, his twinkly smirk undiminished by exile. The globe is burning, authoritarianism is unchecked everywhere, and Putin may be the first world leader in history to project imperial power primarily through trolling. The Russian team may still be exposed in the knockout rounds, which it is all but certain to reach. But for now, regardless of the outside world and regardless of the future, the Russian players are just having fun. 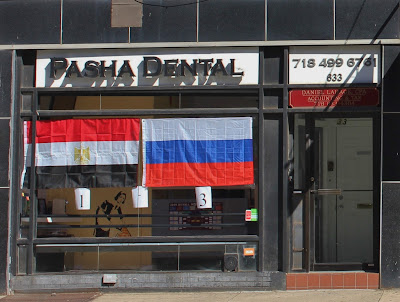 Posted by onemorefoldedsunset at Wednesday, June 20, 2018