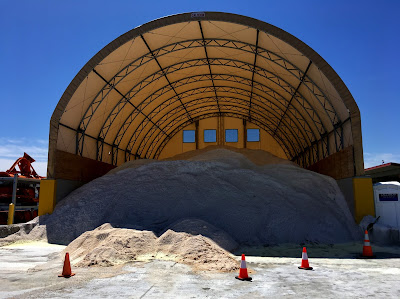 There's something monumental in a pile of salt.  The DSNY shares this Second Avenue site with the Gowanus Canal Conservancy.  The area was once rich in salt marshes, tidal creeks & freshwater streams, & the Conservancy maintains a sliver of native salt marsh.  Salt & salt go well together.

In Specimen Days (1882) Walt Whitman describes a visit to the Jersey shore.  It probably reminds him of Long Island's Great South Bay, but Gowanus in its earlier, pre-industrial days, must have had a similarly sedgy balm:

One bright December mid-day lately I spent down on the New Jersey sea-shore, reaching it by a little more than an hour’s railroad trip over the old Camden and Atlantic. I had started betimes, fortified by nice strong coffee and a good breakfast (cook’d by the hands I love, my dear sister Lou’s—how much better it makes the victuals taste, and then assimilate, strengthen you, perhaps make the whole day comfortable afterwards.) Five or six miles at the last, our track enter’d a broad region of salt grass meadows, intersected by lagoons, and cut up everywhere by watery runs. The sedgy perfume, delightful to my nostrils, reminded me of “the mash” and south bay of my native island...

There's another DSNY salt reserve down at the bottom of 52nd Street - more old Gowanus coastline.  Even a Google image captures a bleached beauty. 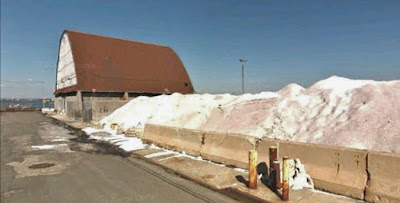 I'm tempted to check out the locations of the all the Sanitation salt reserves.  I think it's a plan!  The most recent shed, at West & Spring in Lower Manhattan, was completed in 2015.  It's stunning.

Posted by onemorefoldedsunset at Tuesday, April 24, 2018