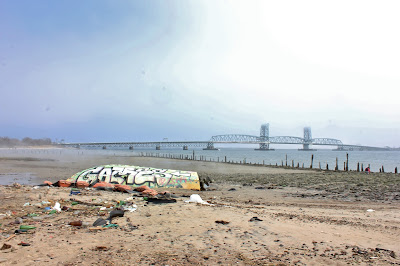 A misty day at Dead Horse Bay.  I went on a trip organized by The City Reliquary.  The event was connected to the museum's NYC Trash! exhibition, which closes this weekend.  We were lucky to have Robin Nagle with us on the trip.  Nagle, author, academic & anthropologist-in-residence to the NYC Department of Sanitation, showed us around the bay, and explained the area's historical significance.  In the mid-nineteenth to early twentieth century, the area was a noxious hub of rendering plants, incinerators, & fish-oil manufacturers, and most of the workers were residents of nearby Barren Island.  Over time, these industries dwindled, and the waters of the bay were used as city garbage dumps.  Barren Island became connected by landfill to the mainland in the creation of the city's first airport - Floyd Bennett Field.  The last residents of Barren Island left by the 1940's. 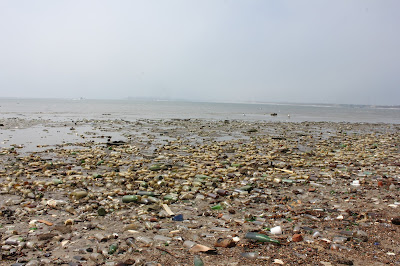 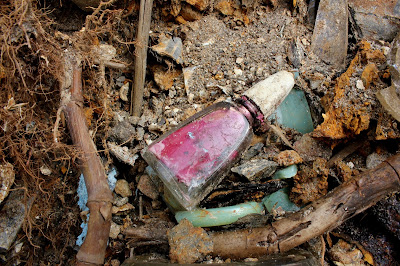 For decades, detritus from landfill, city dumping, and rendering industries has been making its way onto the shore. Year by year, day by day, tide by tide, it keeps on coming.  At first sight it's the glass you notice - thousands of bottles, whole or in pieces - but as you look more closely, you'll see a range of domestic items, many of them dating from the 1950's.  Consumer culture on the rise in every sense - a heyday of manufacturing irresponsibility.  The kitschiest of the treasures make us smile. The pieces are affecting in other ways too.  Whose lives are represented here, and what do these tokens tell us of their owners' labors and pleasures?  A doll's head breaking through sand, a plastic alligator purse, cooking pans, nail polish, an endless supply of hosiery.  Stockings clings to branches and debris like seaweed, drooping and ghostly, or swollen with sand, looking disconcertingly like limbs. Where the edge of the beach meets ridge of grassland, you can see the garbage layered underneath, waiting to disgorge itself.  Sometimes there are signs of a deeper past, when the weathered bones of animals meet daylight. 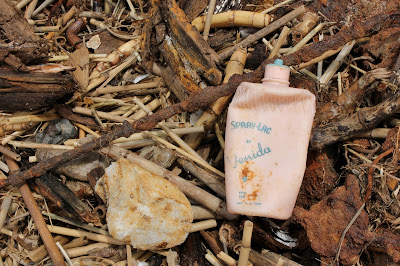 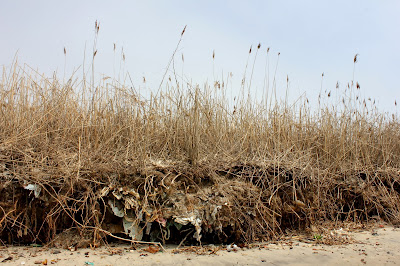 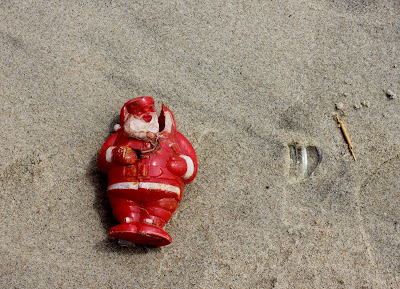 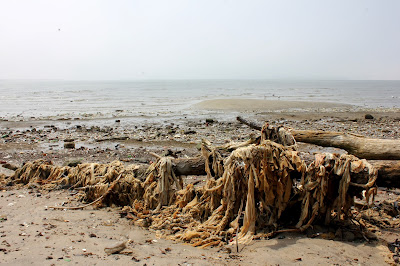 I'd been meaning to get down to Dead Horse Bay for years, and know I'll get back there under my own steam.  The place is compelling.  Many thanks to City Reliquary for putting on the tour, and to Robin Nagle for her expert guidance.
Posted by onemorefoldedsunset at Sunday, April 29, 2018