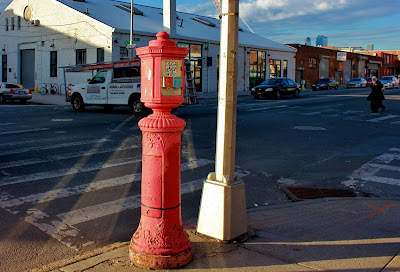 De Blasio administration may ditch planned streetcar along Brooklyn-Queens waterfront (Daily News)
The Mayor denies it, & trashes the News.  Federal aid may be sought for the project.  Chuck Schumer, a "huge fan" of the BQX, just happens to be the father of Jessica Schumer, executive director of the Friends of the BQX.

"We FOILed the infamous BQX Feasibility Study that showed the project planned to use so-called value capture to pay for itself and was not financially viable. BilldeBlasio's office said we would have to wait a year before a determination was made." (Queens Anti-Gentrification Project)

E-bikes could soon get legal OK, mayor says. Citi Bike applauds change in rules that would make pedal-assist bicycles ready to roll. (Crains)
But we still need those throttle-bikes legalized ...

2018-19 Engaging Artists Fellowship
This 1 year Fellowship provides an infrastructure and laboratory for emerging and underrepresented artists to gain a deeper understanding of the history of public art, incubate and present their work, collaborate with communities in shaping society, and build sustainable careers.
Applications due April 20th.

Not a Nice Girl: On Berenice Abbott (Paris Review)
Introspective all her life, Berenice was never so forthcoming as when she mused, in 1922, “Just as a city weaves unceremoniously its design, as one form spins out of another, so a small life is governed by impressions of environments according to the degree of sensitive receptiveness.” In Nightview she has handed us the key to her self-image and inner life. The creative contradictions she harbored so productively—between classicism and romanticism, science and intuition, description and essence—are evident in that single enduring work. “The photographer cannot miss that picture of himself,” she wrote in 1964. “It is his stamp and map, his footprint and his cry.”

A Digital History of NYC Trash, by Jaime Ding
A History of Trash in Sight” takes you through digital reconstructions of New York City public trash cans and their contents from 1930-1960. Each decade’s trash can contains a turning point about “public trash,” along with ideas about cleanliness and control that still resonate in our understanding of trash today.
Take a closer look at what New York City trash was by looking through it. Click on the images of real things and listen to real sounds from the 1930s, 1940s, 1950s and 1960s. Learn what those unwanted things can show about people, power, and what it means to be a part of the public.

The Limits of the Livable City: From Homo Sapiens to Homo Cappuccino (Avery Review)
What then does livability hold for Homo cappuccino? We can interpret the livable city as a tangible complement to platform capitalism, where the social is produced under the guise of a hygge urbanism.47 Livability appears so seductive to municipalities around the world because it promises to facilitate an atmosphere of urbanity, conveying a spontaneously unfolding everyday urban life. Such an approach is embraced as more ethical, because it is ostensibly less about maximizing returns on investment and more about appreciating the stock value of their respective cities, a docile norm conforming to the body of Homo Cappuccino.

30,000 Hidden Images Reveal the World of a Soviet-Era Photographer (Atlas Obscura)
Masha Ivashintsova was born in Russia, in 1942. At 18 she started taking photographs, and became involved the underground arts movement in St. Petersburg, then known as Leningrad. She shot prolifically on the streets of the city, with either her Leica IIIc or Rolleiflex. But she never showed her work to anyone—some of it she didn’t even develop. When she died, in 2000, she left 30,000 photographs—in the form of negatives and undeveloped film—in a box, where they remained, untouched, for 17 years.
Late last year, while working on a renovation, Ivashintsova’s daughter Asya Ivashintsova-Melkumyan and her husband discovered the box in their attic. Slowly they began to explore this archive, and saw what Ivashintsova had seen, created, and then hidden.

Ninety-Nine Years At Syd’s Coffee Stall (Spitalfields Life)
Syd’s Coffee Stall is a piece of our social history that does not draw attention to itself, yet deserves to be celebrated. Syd senior might not have survived the trenches in 1919, or he might have gambled away this stall as he did the others, or the bomb might have fallen differently in 1944. Any number of permutations of fate could have led to Syd’s Coffee Stall not being here today. Yet by a miracle of fortune, and thanks to the hard work of the Tothill family we can enjoy London’s oldest Coffee Stall here in our neighbourhood. We must cherish it now, because the story of Syd’s Coffee Stall teaches us that there is a point at which serving a humble cup of tea transcends catering and approaches heroism.
Posted by onemorefoldedsunset at Wednesday, April 11, 2018