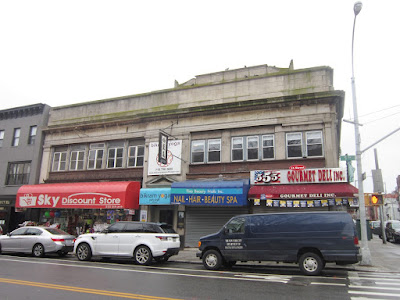 That didn't take long.  At the end of 2015, 555 Fifth, the handsome corner building at Fifth & 15th, was sold for $5.25M.  The several small businesses that occupied the space were displaced and the building underwent a lengthy renovation.  A Crunch gym opened last year, occupying the basement, the upper floor, and part of the first floor.  A Sherwin-Williams paint store opened earlier this year in another of the ground floor spaces.  The third ground floor space is still up for lease.

555 is now back on the market for $27M, with the marketing touting its air rights, upcoming tax abatement, prime location, and in-place tenants.  And talking of tenants, the marketing brochure lets us see what rents they're paying.  Crunch has a fifteen-year lease, increasingly incrementally from its current yearly rate of $750,000 per year to just under $1M in 2032.  Sherwin-Williams has a ten-year lease - $300,000 in years 1-5, and $336,000 in years 6-10.  That's a lot of memberships and cans of paint to sell.

Is there any chance of the owners getting this sky-high price for the building?   Retail vacancies abound throughout the city, and in Manhattan at least, both retail rents and property sales have started to soften.  I've no idea how pricing works, but this one appears unrealistic. 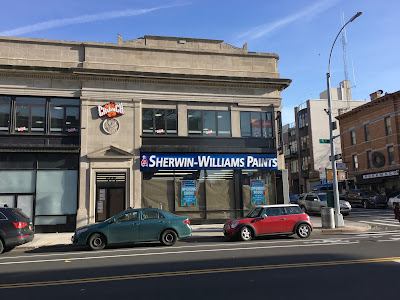 Various earlier posts on 555 include this one, with some links back.
.
Posted by onemorefoldedsunset at Friday, April 06, 2018