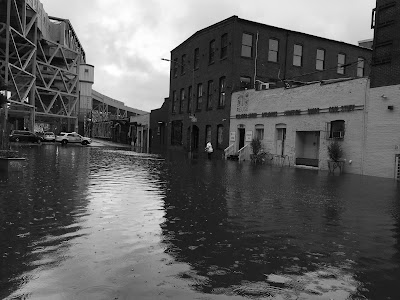 I like to get down to the canal when there's heavy rain.  I usually wear my old Hunter boots.  They're over thirty-five years old.  The rubber is a little thinner than it used to be, but the tread is still good & they haven't sprung a leak yet.  They date back to the time before Hunter became a fashion brand; the boots were mostly worn by farmers or some of those horsey Hoorah Henry Tatler types.  I was neither, but I did spend a spell of time with a lurcher dog, and later, worked with birds of prey, so life was a bit muddy.  The boots I have now are actually my second pair.  I gave the first ones to my mother, though I'm not sure she actually wore them much.  The Hunter green back then was more of an olive colour, rather than the darker green you see in (here at least) the stores today.  Mine have faded, I think (does rubber fade?).  They're kind of an antique shade.  I don't wear them often - I'm slightly worried that they'll finally conk out - but they're just as likely to kick the bucket in a dry closet, cooped up with the out-of-season shoes & boots, the clothes I always mean to wear some day, but hardly ever do, & the Chinese delivery raincoat I got at the 99c store.  So I might as well let them have at it. 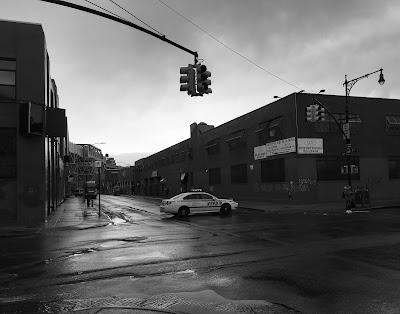 There's nothing like the gleam of the streets after the rain has stopped.
Posted by onemorefoldedsunset at Tuesday, April 17, 2018