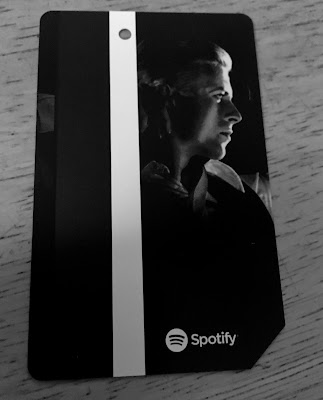 Worth the wait at Broadway-Lafayette.  I must have been there close to two hours, & some of the people were buying not just the set of five different metrocards, which given the random nature of the distribution often meant buying more, but loads extra, presumably to sell at a tidy profit.  Luckily I was just behind a couple of nice people; we traded cards to help each other out.  I only wanted one anyway, to round out a forty-five year span of mementos.  I swapped Aladdin Sane for the Thin White Duke - the classiest looking of the five, I think, even though it represented a dark period, both musically & personally.  I'd hoped there'd be a Berlin card, but this was good enough.
Posted by onemorefoldedsunset at Saturday, April 21, 2018