Houses are sagging and leaning all over the city.  Sometimes you'll be fooled by an upright facade, only to find that the inside floors & stairs are tilting like a ship on the ocean.  If you live in a place like that, after a while you'll get your sea legs, and forget that it ever tilted at all.  Other houses fool nobody.  They could be brick. There's one near me with such a sag in the middle it looks like it's been sat on; the brickwork's cracked and the windows pitch to the center. No-one seems to care - I pointed it out to a passing firefighter once & he just shrugged.  More of the leaners are wooden though; frame has a flexibility that allows it to flout gravity altogether.  Wood is giving.  And a row of houses can offer each other support; you'll come across a run of half a dozen holding each other up like drunks heading home from a night on the town.  They may look past it, but they can still hold their liquor. With a little help.

I've a fondness for frame's tenacity.  Before the price of houses round here boomed, people were more inclined to live with the way their homes had settled in.  Sure, they could get some extra support to hold a slide in check, but that was about it.  A bit of a slump was acceptable. In affluent times, a frame that isn't even renovated can easily sell for a couple of million or more, & a full-scale gut with all the works is in order.  The result is pretty but often jarring.  How did a time-scarred old three-family reemerge as a Stepford wife?

The funny thing is though, it's hard to get a photograph to show the full effect of a leaning building.  Well, in my pictures at least.  They always seem to minimize the disparate angles, as if the houses resist the camera.  I've tried a bunch of times to photograph a group of wooden buildings on Sixth, but I never could capture the way they looked to the eye.  I've deleted countless attempts.  In March I saw that one of the group - a lounger that seemed to be resting back on its heels with its pals - was getting its exterior plumb again.  It will be flush with the brick veneered building two doors over. 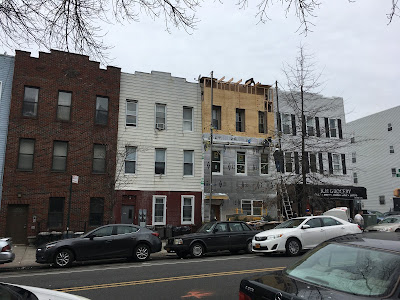 Here's a shot taken later in the month. The light captures the angles a bit better. 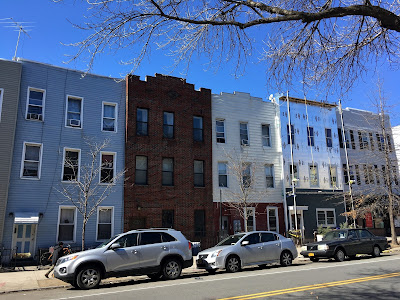 And here are a couple of shots from the other day, as work has moved along.  Again, the angles aren't done justice here. 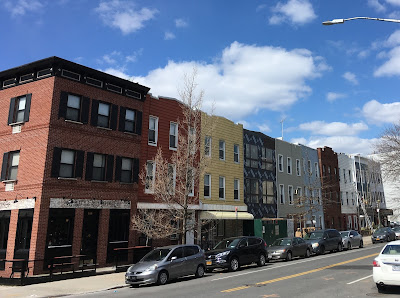 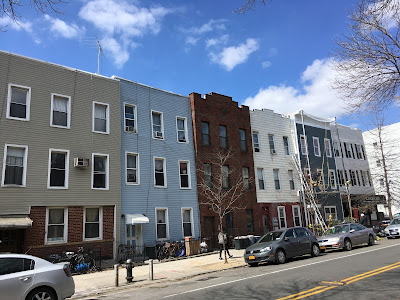 Posted by onemorefoldedsunset at Monday, April 09, 2018