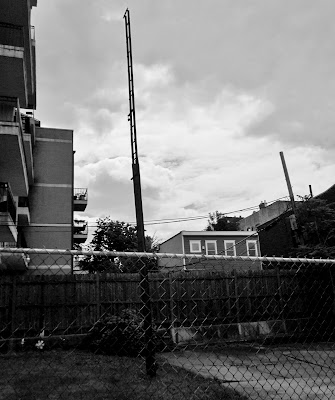 This one stands as a relic, with no line(s) attached.  We still use ours, but it only has one line.  The top one got taken down in the 1980's.  The family that lived in the main part of the house before we moved in included eight children, with two sets of twins.  The children slept in the attic, with boys on one side and girls on the other.

I grew up with laundry lines.  When I was little, my mother used a primitive washing machine with no spin cycle.  Instead we had a mangle - an object that looked more nineteenth-century than early 1960's. I used to help feed the clothes into the mangle & crank the handle to squeeze the water out, either right onto the grass, or into a white enamel basin.  Clothes were either hung outside, or placed on drying racks, that hung from the ceiling and were raised up and down by pulley.  At some point later in the decade, we got a twin tub that spun the clothes too, though you had to use a rubber mat to keep the sodden clothes from driving the machine off-balance. We never got a dryer. When we lived in the country we'd get regular visits from the gypsies, sometimes in the old hooped, horse-drawn caravans. They'd sharpen knives, mend pots and pans, and sell hand-whittled willow clothes pegs, bound together with hoops of tin.  I was always excited when the gypsies came round. Although I knew of the odious, pejorative rhymes and tales concerning gypsies  - robbers of chickens & children alike - I never gave them credence. Instead my head was stuffed with gypsy dreams, of life on the road, and of sitting round a campfire eating rabbit stew or hedgehogs baked in clay. The fact that I was very fond of hedgehogs, and liked to put a saucer of milk out for them at bedtime, and check the morning doorstep for the empty saucer smudged by a pair of tiny footprints, didn't dispel the campfire scenario. I was sure hedgehog tasted good.

How much time laundry seemed to take. My poor mother, with four children to look after, lived a life of endless physical labour.  I doubt I was hardly ever much real help, but I had a few small tasks. Sometimes I set the fire, with kindling and coal, and balled up paper.  Sometimes I helped collect eggs. I suspect my jobs were assigned to me mostly to keep me busy, but I did come in handy as an extra pair of hands in the endless turning and folding of newly washed sheets - a tedious, but strangely solemn ritual.

Until I was nine or ten, when we moved to the hateful town, we didn't even have a refrigerator. Instead we kept our milk and meat and butter in the cellar, which stayed cool enough in all but the hottest of summers.  The milk came daily, and the butcher's van showed up once a week. Every so often my father would wring the neck of a chicken, and my mother would pluck the bird in the scullery.  Without a refrigerator, ice cream was a treat. Sometimes we'd get ice lollies from the village shop - maybe a Sky Ray or a strawberry Mivvi - and lick them contentedly on the walk home. Sometimes we'd hurry back with a carton of Walls, wrapped up in newspaper for insulation.  The paper didn't help that much, with the ice cream often soft & drippy by the time we got to eat it.

We grew most of our fruits and vegetables, & my mother made jars and jars and jars of strawberry and raspberry and rhubarb jam.  One of my earliest memories is of picking raspberries in the orchard, and today I grow my own raspberries in Brooklyn,  They grow like weeds, and I get a good crop of them for a small, city back yard.  Of course, everyone in the family gets to eat them, but as the gardener and picker-in-chief, I think I get the lion's share.  Madeleines?  A line of laundry or a dish of home-picked raspberries always does the trick. 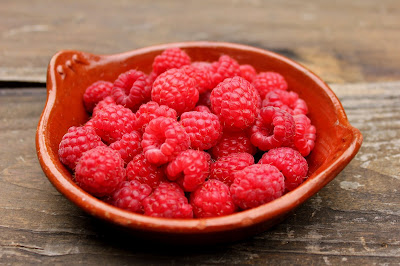 This morning the berries ripened.


Posted by onemorefoldedsunset at Friday, June 16, 2017