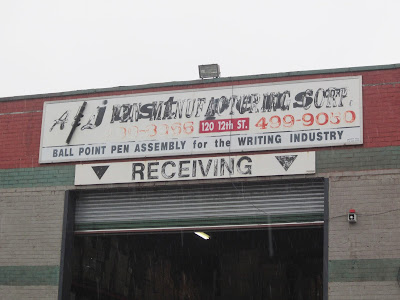 Still one of my favorite (noble) business slogans

(Update - 6/1:  A bartender at next-door O'Keefe's told me that Jacob is out of the hospital and up and about again, albeit in a cast.  She said he'd dropped by the bar recently, along with his lovely dog, Stella.  His store is still shuttered though, and I don't know what will happen re re-opening.)

Sanborn Fire Insurance Maps Now Online (Library of Congress)
The Library of Congress has placed online nearly 25,000 Sanborn Fire Insurance Maps, which depict the structure and use of buildings in U.S. cities and towns. Maps will be added monthly until 2020, for a total of approximately 500,000.
... By 2020, all the states will be online, showing maps from the late 1880s through the early 1960s.

In New York’s cutthroat residential market, experiences are the new must-have amenity (Curbed)
That idea of locality also inspired developer DDG for one of its amenity offerings at The Standish, its anticipated 29-unit condo conversion within Brooklyn Heights’s former Standish Arms hotel. Residents of the building will have access to a “boat valet,” through the One15 Brooklyn Marina in Brooklyn Bridge Park, who can arrange for sailing lessons and other “private boat experiences” along the East River.

These Radical Black Women Changed the Art World - Jessica Lynne speaks with the curators behind the Brooklyn Museum’s landmark exhibition about the revolutionary artists who transformed American culture. (Aperture)

What a Few Little Notes Can Do: a new essay by Romy Ashby (Walkers in the City)
On Seventh Avenue a little family of sparrows is growing in one of the streetlamps. I’ve watched the two parents delivering takeout to the kids, who have their full growth now and are starting to peek out. I can see what looks like singing going on up there, but the subway drowns the sound out. Behind the wrought-iron gates of the seminary garden over on 20th Street is a whole other story.


Posted by onemorefoldedsunset at Thursday, June 01, 2017