(In the latest of our visits to Third Avenue we visit the 3rd Avenue Junk Shop. All photographs, unless otherwise indicated, are by Larry Racioppo.  You can also find this post on Brooklynology, the Brooklyn Public Library's Brooklyn Collection blog.) 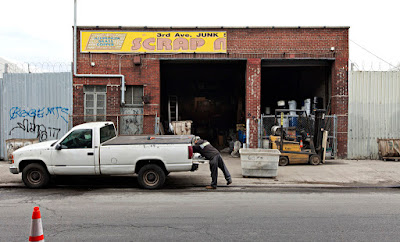 The volume of business at the yard varies. On some days the scrap comes in as soon as the shutters roll up, and the place remains busy until closing. On others, things are quieter. Business is "spotty," says owner Dominick Palmiotto. 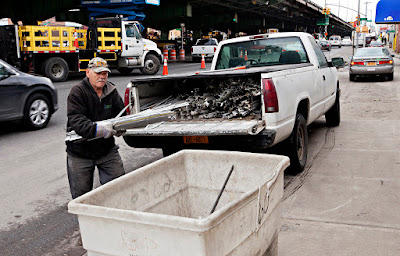 Business here boomed from the 30's to the 70's, when the shipyards on the waterfront were still active. In those days Palmiotto’s would send trucks down to the piers to pick up an abundance of metals. Todd’s, Bush Terminal, and Bethlehem Steel were all humming. Now the scrap is brought to the yard.

Most of the metal comes from licensed electricians, plumbers and roofers. Sometimes you’ll see guys along Third, on foot, or bicycle, hauling loads of scrap in supermarket shopping carts. Their metal isn't taken here. They're usually heading toward the Gowanus Canal, for 6th Street Scrap or Benson Scrap on Smith Street. Larry Racioppo has been photographing individual scrappers along 3rd Avenue for several years. Here are two images from his city-wide photography project. (You can see more here ) 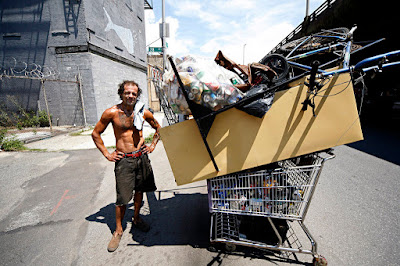 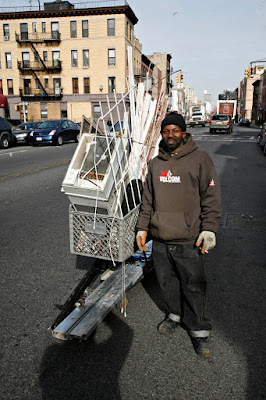 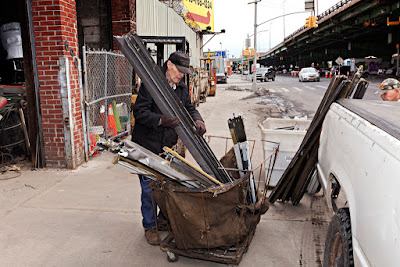 Palmiotto is still involved with the cart work, though he’s keeping it lighter these days.  At 83, he’s an active presence, and as sharp as they come.

At quieter times of the day, Palmiotto is holed up in his office, a metal shed inside the warehouse. Often he's in there with his younger partner, Johnny Giardina, but much of the time he's alone. Time hangs heavy these days, after the death earlier in the year of his wife, Jadwiga.  They were married fifty-one years, and Palmiotto describes her lovingly - "a real doll," "a natural redhead." He brings out a photo; you can see she was a beauty.  He tells me how they got together; they'd met once before, but the real start of things was a chance sighting through a Manhattan restaurant window – Palmiotto on the sidewalk & Jadwiga, working as a waitress, inside.  Their eyes met, they got to talking, and the waitress got off duty right after the lunch rush.  That was it.

The warehouse was built by Palmiotto’s father, in 1948, but the business is older than that.  It was first located across the avenue, at 21st, and dealt in metal, rags and paper.  In those days there were a couple of scrap or junk yards on every block of Third, Palmiotto says. His father set up shop in 1935, but several years later the place was seized by eminent domain, to make way for the Gowanus Parkway.  Palmiotto has worked in scrap since he was a kid, helping his dad.  A stint in the forces during the Korea War led to training in air conditioning and refrigeration, courtesy of the G.I. Bill, but he stayed active in the family business. He took it over in 1986.  Altogether, he’s put in 67 years here. Today he comes in to the business from a home in Midwood, but he's lived in a cluster of Brooklyn neighborhoods, including Gravesend, Sheepshead Bay, and Kings Highway.  He's a shrewd businessman, and owns a number of properties.  You’d guess he doesn’t really need to put the hours and the physical effort into working here on Third, but it keeps him in the game, and he’s not one for idling.  He reads widely, and has traveled.  He's studied lexicography, and can speak four languages, five if you include the disappearing tongue of early twentieth-century Brooklynese. 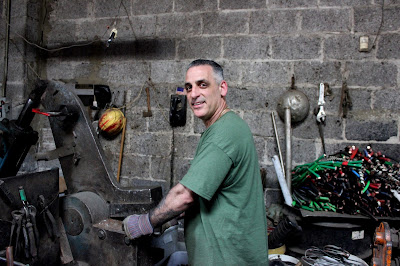 
Johnny Giardina is a longtimer too.  He’s been at the junk yard since he was twenty-four, and before that he worked at his uncle’s auto-salvage business right next door.  He started there at sixteen.  The business, long closed, is remembered by all the old-timers on the avenue.  It was featured in a 1980 documentary, Jon Alpert’s Third Avenue: Only the Strong Survive, which looked at the 1970’s Third Avenues of Brooklyn, the Bronx, and Manhattan.  The three Brooklyn scenes in the film feature Sonny and Eddie, father and son at the auto salvage, the Lopez family in Sunset Park and the societal gulf between the religiously observant factory worker father and his streetwise kids, and the Pascones, an elderly Gowanus couple trying to decide whether to sell up and leave their home and barber shop.  Sonny’s son, Eddie, and his brother-in-law Michael demonstrate the wilder side of the salvage/chop shop business, and are shown cruising the streets at night for cars.  A later scene shows Eddie entering the prison system.

Johnny recalls a very different Third when he was young, with tractor trailers idling in a whole lane of traffic as they waited to get to onto the piers. 
Like Palmiotto, Johnny’s old enough to remember the myriad of auto and scrap businesses that thrived on the avenue, along with the attendant bars and restaurants that served the waterfront workers: the Gold Mine, Marine Tavern, Hatch 5, Moscarella’s, The Riverboat, and many others.  And also a busy prostitution scene ("all kinds").  “Everything’s gone now,” he says, and it’s true, the older businesses are thin on the ground.  Farther south, there’s Frankel’s shoe and clothing store, which must set the record for longevity, having been on Third Avenue since an astonishing 1890, but Palmiotto is the elder statesman on this stretch.  I’d give anything to see the avenue he saw as a child in the 1930’s.  This was a real industry city. 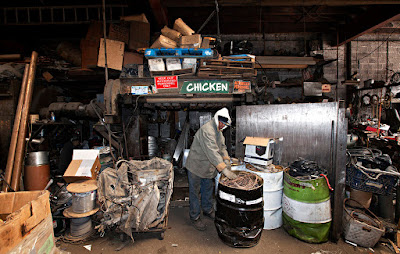 James "Duke" Baines came to work here after the closure of the iron foundry at Third and 24th, which stood right by the site of Viking Iron, also torn down by Moses in the late '30's.  He’s been with Palmiotto for a decade. He says the scrap business is slower these days, due to a soft Chinese market.  The price of copper has dipped.  It's solitary work much of the time, but Duke says he likes it that way.  He grew up in East New York and Brownsville, and left the city for a while to live upstate, in Binghamton. He says a lot of his neighbors are moving there, and to other areas outside the city - it's just too expensive here these days.  He said the scene in Binghamton had gotten a little crazy, and anyway, he missed New York, so he was glad to come home. 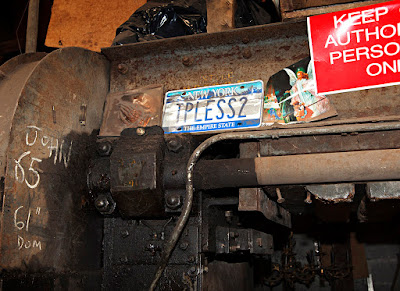 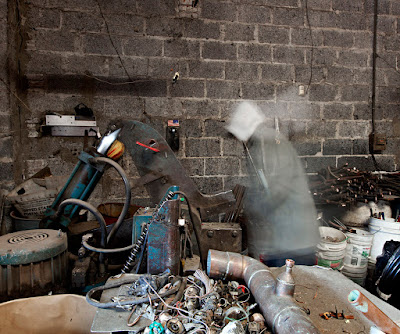 The metals most often bought are copper, brass and aluminum, all of them non-ferrous. Sometimes there's monel, a mixture of copper and nickel 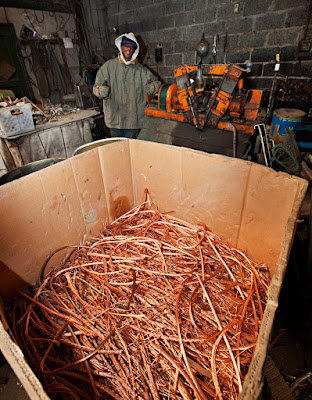 Copper's the prize though.  A box of copper wiring Duke has stripped lies in a heap ready for resale. It’s straw to gold. 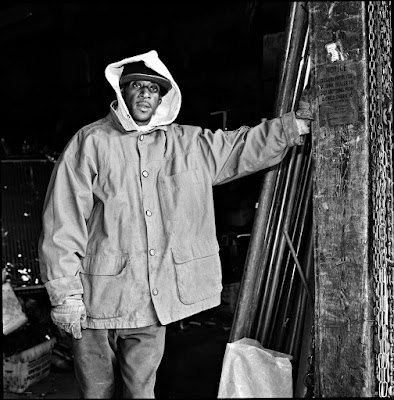 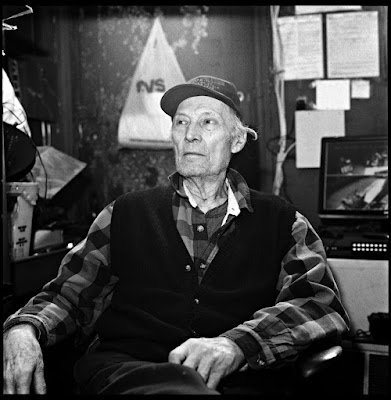 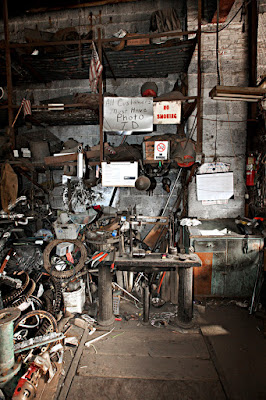 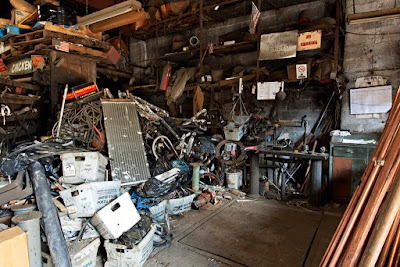 The shop's a Vulcan's cave of metal and grease. Heaped on the floor are the spoils of industry: cogs and spools, grilles and panels, guttering and beaten drums. Ducts and cables coil loosely among them or hang from beams along with rope and shovels.  At the heart of the shop, there’s a scale that's borne decades of scrap, and with it, weighed the history of waterfront manufacturing.

At the end of a day's business, the carts lie empty.  Their frames are bent, and their canvas is shredded and sagging, like the rigging and sails of a fleet that has seen hard use. 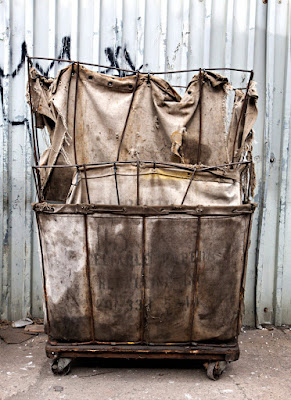 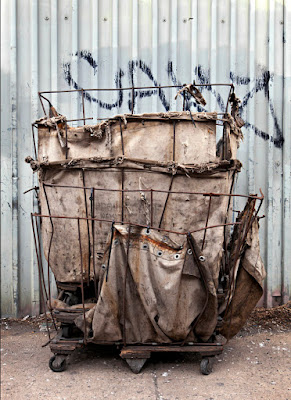 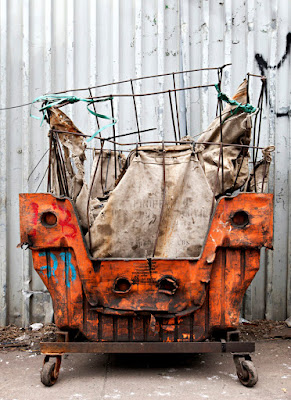 Each stain and tear and dent transforms the carts. Over the decades of loading and unloading, they become raw sculptural forms. On one, the pattern of oil dapples the canvas.  On another, it saturates vast areas of fabric.  Each cart, listing this way and that, has taken a different kind of beating.  This is the art of endurance. 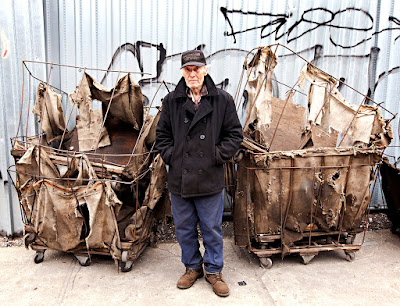 Posted by onemorefoldedsunset at Friday, June 30, 2017

Dominic was my uncle (not blood-related -- he had married my father's sister, Jadwiga -- but he was always a favorite relative), and I'm so thankful you took the time to write this article about him. I find myself revisiting it every handful of months or so, whenever I'm trying to explain him to a friend who missed out on the opportunity to meet him. I never got his opinion on your piece, but your writing carries a sense of nostalgia and draws a narrative that I think he would have appreciated. Thanks so much!

Thank you so much for getting in touch - I really value your words. Larry (who took the great photographs) and I visited Dominic several times around the time this was written, and it was a great pleasure to talk with him. He was certainly quite wary of us initially, but soon it became clear that he enjoyed our company. He had a lot to say (!), and it was fascinating to learn about his life history, the family business, and an earlier Third Avenue. One thing that that stood out for me in our conversations was his great love for Jadwiga. Please accept my condolences for you and your family's loss - Dominic was an unforgettable man. If you're able to do so, I'd appreciate it if you could contact me offline at onemorefoldedsunset@gmail.com - I have a couple of questions. Thank you again.