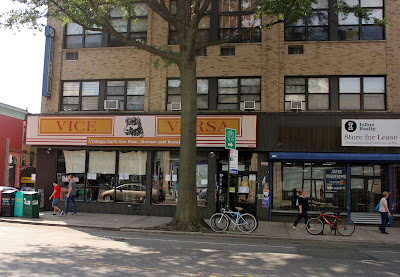 Vice-Versa, the thrift store at Fifth and 15th, is closing at the end of the month. The next door Rent-a-Center, housed in the same building, closed earlier this year. On the same side of the block the G & M Mens Suit Outlet lost its lease in January, but is still open for now.  iLoveKickboxing opened on the block late last year, and a Crunch gym is supposed to be opening soon on the NE corner of 15th. The Crunch gym was set to share its space with other retail tenants, and For Lease signs are still up on the building. Nearby Monk Thrift, at 16th, also closed this year, and was replaced by a French bakery. On the NE corner of 16th a long-closed retail space, formerly occupied by a kids' prep center, is still vacant. North of Vice-Versa, up to 9th, empty stores include the former Radio Shack, Frank's barbershop, Camelia restaurant, Max beauty supplies, the maverick, barely-ever-open-but-really-closed-now-I-think Beba's La Royale/Mezini (such an 'interesting' business), & the long-closed Garry's Jewelers (oh leave that beauty be). Something new appears to be opening in a new building at Fifth & 12th, and a store under scaffolding at 10th is undergoing renovation.

That's a lot of change, and a lot of vacancy. Thrift stores, at least those of the vintage variety, often act as placeholders as neighborhood retail goes upmarket. Vice-Versa & Monk seem to have served their roles.  Monk always seemed like a bit of an over-stuffed closet - too musty & exhaustingly packed with goods to tackle, but Vice-Versa has more space, and cheaper prices.  Most of its stuff is plain old second-hand rather than 'vintage,' but it's popular with a wide range of clientele - it's not just middle-class teens and twenty-somethings hoping for a cute find. The Life vintage store at 13th is similarly popular. These two - especially Life - operate as a cut above a Salvation Army store, and Life has a higher-end designer range, but the basic prices are still modest.  I just got a pair of shorts at Life for five bucks, and have found quality leather boots for $30 or $40. Fifth Avenue used to have a number of charity thrifts and small discount outlet stores, & before the condo at Fifth & 13th was built, with Life as a retail tenant, there was a charity shop there.  DII Deals & Discounts on 9th doesn't look like it's going anywhere soon.  There are still plenty of people looking for bargains.


Posted by onemorefoldedsunset at Monday, June 12, 2017