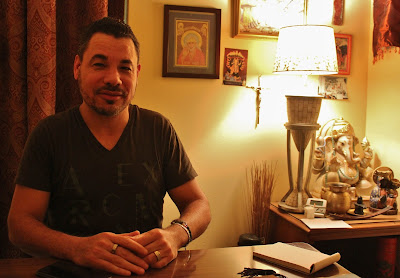 When I first go into Mystic Essentials, owner José Santana is busy in the back with a customer. Frankie goes to ask if I can speak to him. 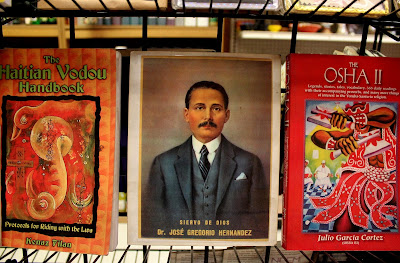 To be honest, I'm not expecting José will spare much time for a curious outsider, but I couldn't be more wrong. He appears a few minutes later - a compact but graceful figure, dressed in a wine-colored Indian shirt embroidered with silver thread.  He's amused, I think, by my interest, but doesn't seem the least surprised.  When I meet him, what strikes me immediately about him is his air of serenity. A few minutes after we've first met, we're sitting by the window sipping coffee and Jose is telling me how he got here. His story pours out in a rush, as life goes on around us, customers coming or going, or waiting to see him.  A guy with dreads drops in for candles.  A woman slips a dollar to St. Michael. I ask him several times if we should adjourn our meeting, but he smiles, shakes his head and continues. The story's a circular one, as events loops back and link to earlier ones. Even a minor circumstance, however slight it appears at the time, is set to resonate in future. 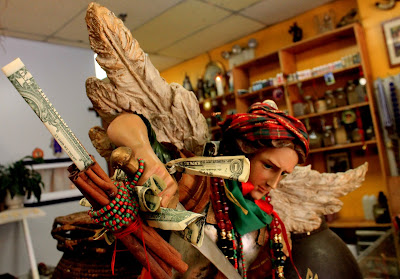 José grew up in the Dominican Republic.  He was born in Salcedo, a small town in the north of the country, and talks of an upbringing steeped in the Catholic faith.  He describes his mother as religious, but also "modern" and "open-minded." He was the middle child of three, and after a difficult birth with her first child, his mother consulted "la negra" in preparation for the next one. José, or little Pilarito, as his family called him, was born prematurely, at seven months, and the doctor attending the birth told his mother that her son was born to do something special.  His great-grandmother predicted a life in the priesthood. 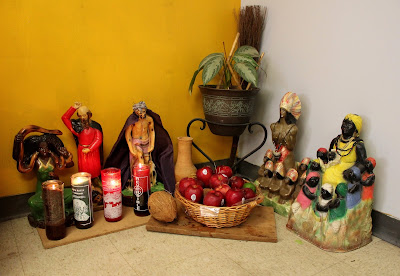 José's childhood was colored by dreams. At around nine years old, he dreamed he was standing in a river, and he knew, with a dreamer's certainty, that he was present at the end of the world.  Amidst a scene of chaos, with people rushing to flee the scene, there was Jesus, himself a child, standing in the waters too. He spoke to José, as if he'd been waiting for him, and told him he too would be a savior some day.  As he grew, his mother continued to visit a healer.  This was something that he knew of only peripherally, but her visits made him curious. 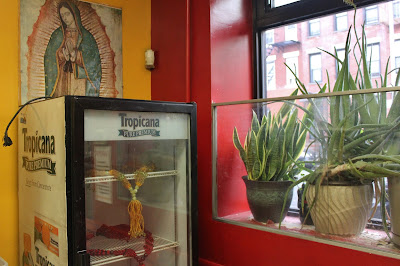 At the age of 16 or 17, before he had finished high school, he was chosen to attend a seminary run by Guatemalan priests, for a week of religious and moral instruction. There were three days in town, with talks on morality, and advice that was as much psychological as religious. The priests told the boys that they didn't have to go to church to be close to God, and taught them how to create meditation spaces.  After the time in town, he and the seventy or so other young boys were taken to the mountains for a period of retreat. The students came from all backgrounds, and were instructed to put aside worldly possessions during this time. No phones, watches, or other markers of the outside world were allowed.  The boys studied together, and slept on cots in a dormitory.  José remembers the meager rations of food the boys received, and how they balked at the conditions. But the spartan meals and the social mix of rich and poor students were all part of the teaching, and the lessons in humility he learned there, in the beauty of the mountains, have stayed with him. Towards the end of their stay, three boys were chosen for their special spiritual promise.  José was one of the them. But the promise was deferred. 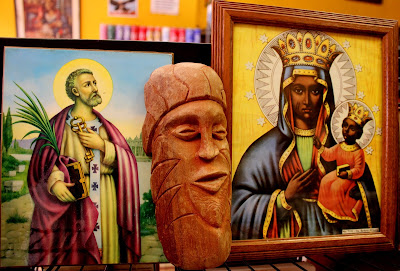 As a young man José studied business and accounting in San Francisco de Macoris, then lived for a period of time in Santo Domingo. José brings up humility again, as he tells me his story.  Living in a poorer district of the capital, José says he was still learning to abandon residual assumptions about race and class.  And he was still struggling to find the way to spiritual harmony, visiting a series of churches and healers that never quite gave him the authenticity and guidance he needed. Finally though, after refusing the suggestion of a visit to her several times he consulted a Santera called Maria.  In the casa de santa at the back of her house, Anaisa (a 21 Division lwa, or spirit) spoke to him through her. His scepticism started to waver. She knew too simply much about him, including intimate details of family affairs, and she mentioned the business of that black spell a jealous wife had placed upon the house where he was living with family and friends. He'd known there was something bad about the atmosphere there. She predicted a move to the States, and told him he'd meet someone special there and start a business together. Before he left the country José had an urge to visit a river again. His cousin took him out on the trip, and of course, there it was in front of him, the same river where Jesus had spoken to him all those years ago.  He was traveling in the right direction. 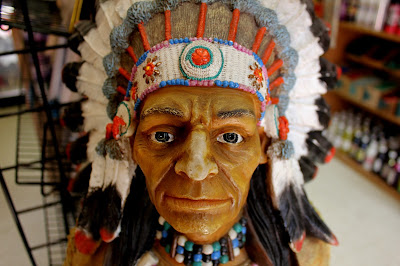 In the States there were more of the signs that defied mere coincidence.  After landing at LaGuardia José took a taxi, going, as he'd hoped, to the Bronx, where his father was living, but the cabby, either confused by the instructions or more likely ready to scam an innocent newcomer, drove him all the way out to Brighton Beach.  It was a long trip back uptown.  José settled into life in the city, and like many gay Latino New Yorkers, often gravitated towards the social scene on Roosevelt Avenue, in Jackson Heights.  One morning, after a night of heavy drinking at the Friends Tavern, a monster of a hangover convinced him he'd never go back to that bar again, but only a couple of weeks later a friend convinced him to go along with him "just for a quick visit," and there he was again.  Wearing a love attraction perfume his friend had dabbed on, but hardly in the mood, he met his future partner, James Rosado.  At first the signs weren't good. José didn't like the looks of the crowd James was there with, but as the evening wore on, things clicked.  James, of mixed Puerto Rican/Salvadorian heritage, was working at an optician in Manhattan, doing readings in Downtown Brooklyn, and living in Brighton Beach.  In James, José found the home and partnership he'd longed for, and eventually they set up their business on Fourth. 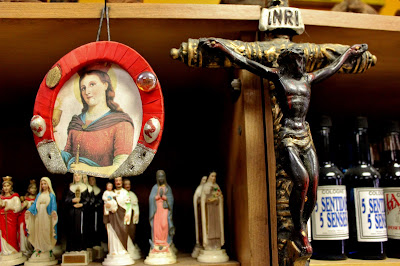 After James's death, the botanica suffered a wave of shock and grief.  For a while José hired a reader to replace James, but it didn't ever feel right; he began to take on the work himself.  An elderly woman I spoke to said José wasn't yet as good as James, who "didn't even need the cards," but had the gift, and was gaining in his skills.  She told me it was hard to get over here to Sunset Park to see him, but it was worth the trip. 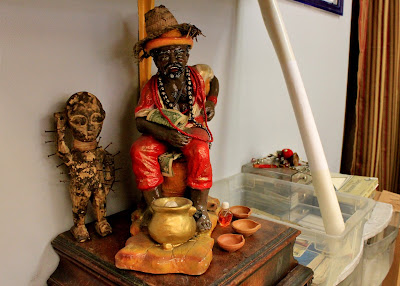 I stop by Mystic Essentials another afternoon. It's packed with visitors again.  José's little dog Chewy is underfoot, demanding attention, and a black cat, Simon, is a warier presence.  A couple of friends in their twenties are here together, one supporting the other's consultation.  Four women and a toddler are sent away but return later, and are able to snag the last appointment of the evening, towards eight o'clock.  Everyone here is patient, even the toddler.

Because their needs are greater than mine, I let most of the women go ahead of me. It's almost closing time before I get the time to talk with José again. The consultation room, behind the store, is small and softly lit.  It's a comforting refuge.  At the end of a long and busy day, I suggested he might be tired from working with so many clients, but he told me it was the opposite; he draws strength from his work. With the night drawing in, and other clients waiting to be seen, there isn't time for a reading this evening.  I'd return for it, though. 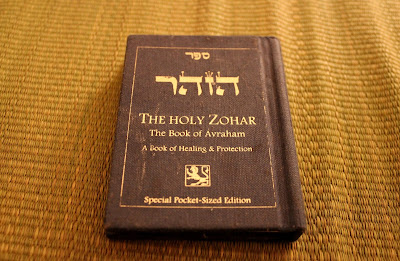 I'm back a couple of weeks later.  In the consultation room, I'm told to pick my bag up off the floor and place it on a chair. "Money runs out the door," José laughs.  And then we turn to the reading. While forms of divination vary, and can involve shells, or palm nuts, José commonly uses cards. He runs through some steps in basic numerology, to determine my personal number, and the element it represents. The number also reveals the most spiritual days of the week for me, and how I should conduct myself on those particular days.  Every nine years the universe enters a new cycle, and 2017 marks a new planetary beginning.  I'm counseled to maintain a good connection to nature and to practice self-discipline.  Before we turn to the cards we cleanse our hands with Florida Water and lavender.  José uses two packs of cards. The baraja Española cards date back to the fourteenth century, and are used here for general readings. These are the ones he uses today.  The Santa Muerte cards are reserved for specific situations.  They are powerful, have darker associations and are not to be toyed with. 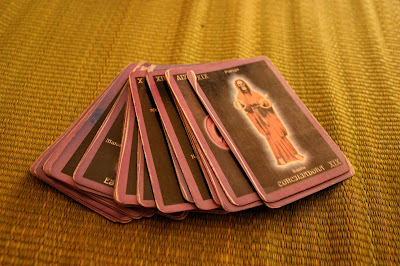 José recites a blessing before the cards are cut, placed and cut again. The cards are placed in a pattern that marks a central state of being, and move from the present, through to the immediate and more distant future.  I'll just say that St. Michael appears in the cards surprisingly often, acting in his role as a protector. 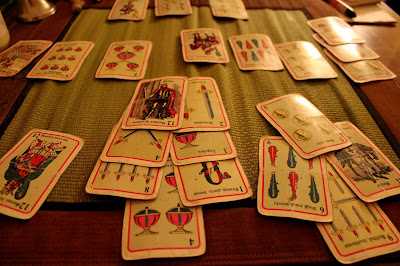 (All photographs by One More Sunset)


José says his mission is to heal, to love, and to pray for the wishes of others.

Posted by onemorefoldedsunset at Sunday, June 04, 2017

I love your blog more than ever - these posts are wonderful. Thank you.