I was down on Third around five or so & after a gray sort of day the sun was beautiful.  A couple of guys were sitting on milk crates outside the live market.  They were eating oranges. A woman was walking a Highland Terrier, and a man passing by was asking her advice on dog toys.  A truck held up at a light was blasting Albert King nice and loud. After the truck took off Born under a Bad Sign stuck around or a few blocks more.  An older man was sluicing down a sidewalk

I came up from Third Avenue to Fourth, just as a bunch of schoolgirls was leaving Al Noor. There was a woman leaving the building too.  She was carrying a tote bag on which was written NO PHOTOGRAPHS PLEASE.  I wondered if this was a slogan or an actual request.  I guessed it was the latter, and that sounded awful.

On a 20th Street lamppost, there was a weather-beaten sign for a movie shoot.  It was an indie film. The title seemed a little grandiose.

Up to Fifth and home. 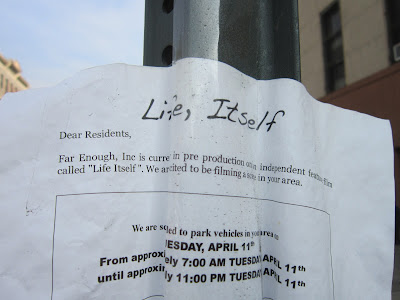 Posted by onemorefoldedsunset at Friday, April 21, 2017