Still fixtures on Astoria Boulevard, some businesses that, either in name, or looks, or both, are working an earlier commercial appeal. 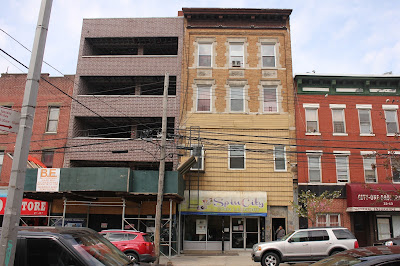 The City Sliquors, and the Spin City laundromat, are still banking on a 90's era corny charm, though maybe they're not quite as good as Hanna and her Sisters Nails, on (still Astoria) Broadway.  Other old favorites on the stretch between 21st and 31st include the best looking realtors' office in the city. 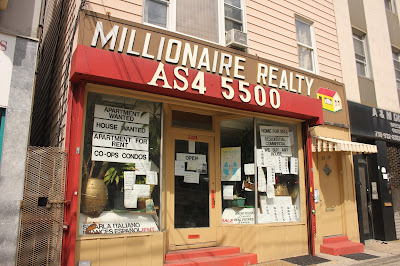 I'll take this over the any of the softly whispering Hearths and Collectives and Compasses. And even Zealestate.  Millionaire is kidding no-one here. Let's spell it out - it's all in the money isn't it? Though in fact it looks like something of a budget operation, which makes its name even better. Whenever I walk by, I'm always glad that all of the letters, and the little yellow house and the old Astoria phone exchange are still intact. 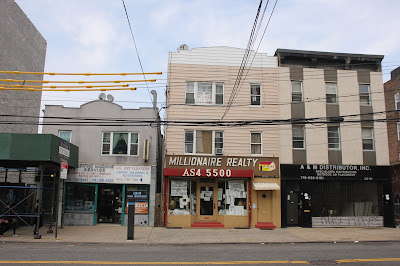 I'm not too sure about that sign in the upper window though.

Farther along, there's a block where the signs get manic - a riot of stop signs, foreclosures and bugs. The size of the bedbug and the cockroach will get you feeling queasy, and if you're like me (be glad you're not), the Pest Control/Beyond Pest Control dichotomy will play in a loop inside your head far longer than is good for your health. 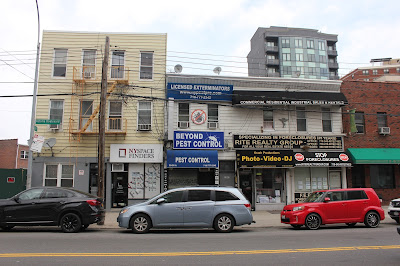 In quite another stretch of Astoria Boulevard, some charismatic signs from a while back.  They were taken in - what? - 2014.  It only seems a minute ago.   Are any of them still there?  I hardly have the heart to check.

Posted by onemorefoldedsunset at Monday, April 17, 2017