I was wondering what was happening to the empty store after the Z & T deli closed recently. Today I found out, from a notice in the window, and the news is good. 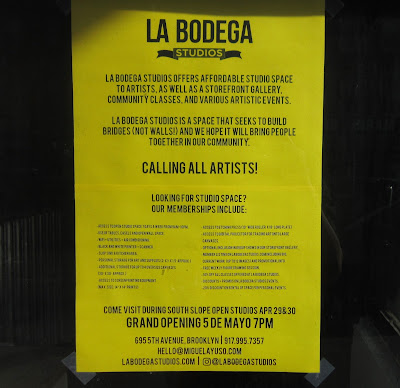 La Bodega Studios offers affordable studio space to artists, as well as a storefront gallery, community classes, and various artistic events. Centrally located between Sunset Park and Park Slope, La Bodega seeks to build bridges (not walls!) and we hope it will bring people together in our Brooklyn community and beyond.

Miguel Ayuso is a Brooklyn based graphic artist and illustrator originally from Oaxaca, Mexico. His art takes many forms and has appeared in the Mexican Museum of Design in Mexico City, The Institute of European Design in Barcelona and The Brooklyn Children’s Museum in NY. At the foundation of his process is an incessant desire to play, re-invent and create whimsical imagery. When he’s not designing, he’s out riding his bike, playing with his two kids or finding another colorful poncho to add to his growing collection.

If you've been to nearby Baba's deli, you'll see a mural of Ayuso's in the back yard.  La Bodega Studios will be participating in the South Slope Open Studios (April 29, 30) & its grand opening will follow on Cinco de Mayo. 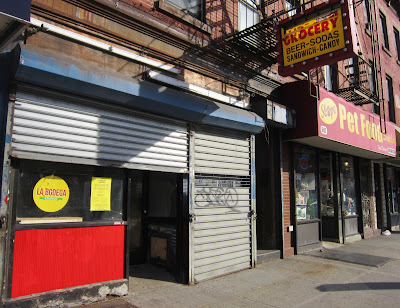 Posted by onemorefoldedsunset at Wednesday, April 12, 2017