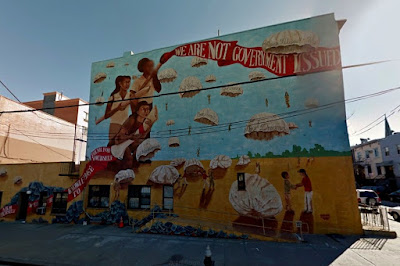 “If you go to some Manhattan schools or places where the families have a higher income, you don’t see the recruiters there,” said Ebony Thurman, 18, who was once approached by recruiters at the Atlantic Avenue subway station. “But if you’re in Brooklyn or in lower income neighborhoods, that’s where you really find them trying to recruit people."  (NY Times)

There's been a Groundswell mural up at Third and 23rd since 2008.  It was painted by a group of young women who wanted to draw attention to military recruitment practices in lower income neighborhoods.  As with other murals painted through the Groundswell Community Mural Project, it promotes collaborative youth empowerment, and highlights an issue pertinent to under-served communities. And it involved research. For this project, this meant talking with female veterans about their service, and researching the laws surrounding recruiters' access to high schools, high school students & their families. The women also studied the use of military propaganda.

According to the NY Times story, the mural was designed with its location in mind.  The top portion, visible to expressway traffic, offers a broader, more immediate impact, while the street-level portion is more detailed.

The Times article generated a lively, mixed response from readers, and Amy (Amy Sananman, the then Groundswell director?) stressed that the project was designed to encourage informed decision making, 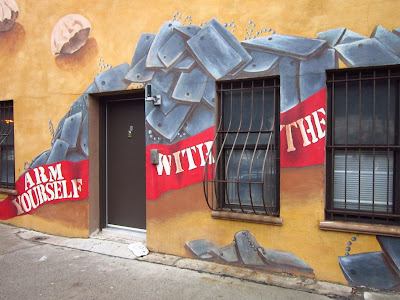 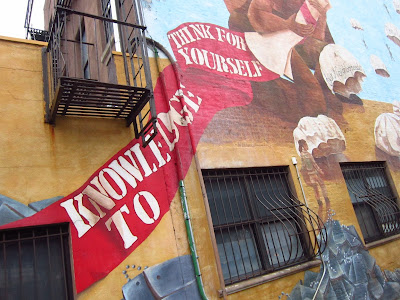 The Groundswell murals are a familiar presence in the neighborhood.  Nearby sites include Sixth and 18th (at PS 295), 25th and Fourth (at the C-Town supermarket), and Fourth and 38th (at PS 24),


Posted by onemorefoldedsunset at Sunday, April 23, 2017