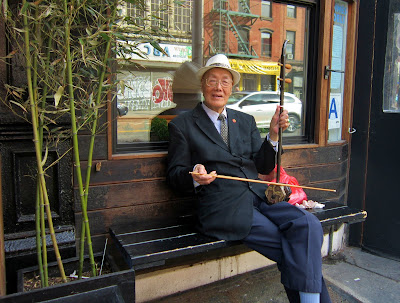 At twenty degrees hotter than normal for April 11th, I sat outside at Canal & Division.  The traffic of the sidewalk was (maybe) half Chinese, and half twenty-something hipster-riche. The warm weather brought out bleached-blonde waifs in sheer white lace, and dozens of tattooed arms and legs pale in the '17 sun.  In the little park triangle, a shouting match was going on between a bunch of skateboarders and a couple of park-sitters, pissed at the invasion of their space.  You couldn't really blame the sitters; the skateboarders had placed a bench for stunt performing right in the middle of the park.  One of the sitters, a bare-chested white guy who was drunk or high or something got to his feet and paced around the triangle screaming, and a woman in his company called the cops.  No-one was really handling things well and the noise brought a crowd of onlookers. But the bench got moved, the bare-chested guy sat down again and the skateboarders drifted away. By the time the cops arrived all was quiet again.  All throughout this mini-drama the elderly man next to me, a picture of refinement, played on.


Posted by onemorefoldedsunset at Tuesday, April 11, 2017