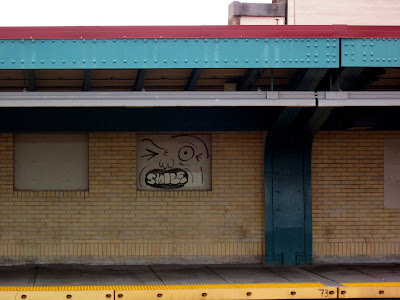 A couple of days ago there was a cute couple sitting near me in a coffee shop.  They were young - maybe twenty or so, and I guess you could call them some kind of hipsters or something - though not of the white, middle-class garden-variety.  They had a sweet earnestness about them, and they had a Look. He had a quill piercing his left ear, with the banded feathers extending horizontally a good few inches behind the lobe. She had a big mess of dyed black hair and vivid lips.  They were good together.

Their talk turned to bathroom laws. The guy said, "straight, gay, trans, whatever, it really doesn't matter. When the aliens come for us, you think they're gonna care?  Or else we'll all end up heap of dust anyway." She had pretty much the same sense of things: "The buildings, the cars, all the man-made things we see outside, they're nothing.  It's only us that matters.  We're all the same & we're only going to be here for a minute."

Later they got onto the topic of work.  The term "lower class" came up and she said, "but there's a class below that.  It's "beginner class."  She explained to him: people in the lower-class have at least had a job, but the beginners had never worked at all.  "I'm beginner-class," she said.  With no experience, I can't get anything.  We're the lowest of them all."

They were a little crazy, but there was beauty in the craziness.  And some truth in there too. They were trying to make sense of a screwed up world, and in a screwed-up world they sounded pretty good.

At the station today, a man was wandering the length of the platform talking to himself.  Or someone. He was unremarkable looking - neatly dressed, clean shaven, in his sixties or seventies. These days you assume talk like this is half of a phone conversation, but this time it wasn't the case.

Soon he was out of earshot.


Posted by onemorefoldedsunset at Sunday, April 02, 2017