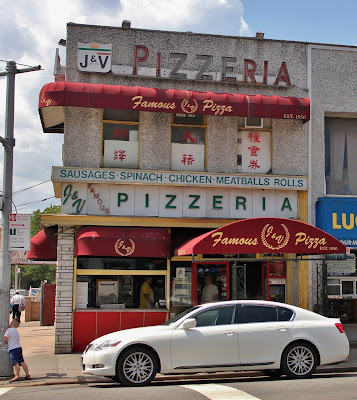 I had to go back to 18th for a slice at J & V Pizzeria, Home of the Jo Jo.  I just opted for a regular slice - very decent indeed - though I know that the Pizza Authorities extol the grandma, Sicilian, and the fresh mozzarella.  There's steady window service, a counter with seats up front, and a nice back room, with some fine-looking furniture whose decade I can't quite place.  Sixties? Seventies?  While I was there the owner and an employee were putting up LED lights, to the accompaniment of groans from people at the front. "It's too bright!!" But the owner was pleased with the results.  "These will last for ten years - they'll outlast me."  I asked about the mural on the back wall, and he claimed it was worth two and a half grand, though he'd picked it up, apparently, for twenty-five bucks.  He'd got it at an auction in Queens. The back room was empty when I first sat down, and I was going to get a mural shot before I left, but by the time I was finishing my slice some schoolkids trickled in, followed by a bald-headed, broad-shouldered guy in a God Bless America shirt.  He sat right in front of me, and his solid, immutable presence signaled the end to my picture-taking whimsy. 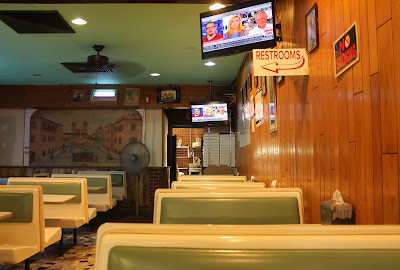 J & V's is rated right up there for Bensonhurst pizza, and right across the street there's Bari Pork Store, King of the Sausage.  Double the pleasure. There's a N stop there on the block - another of those grand old ruins like the New Utrecht station.  In this case Improving Non-Stop seems a little premature, perhaps. 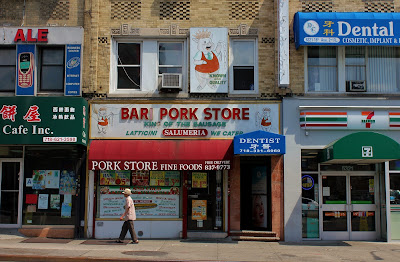 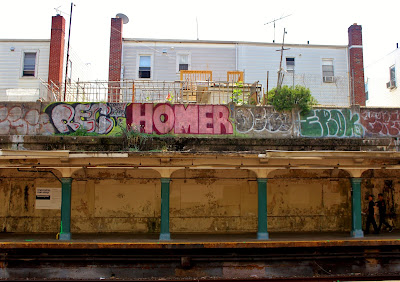 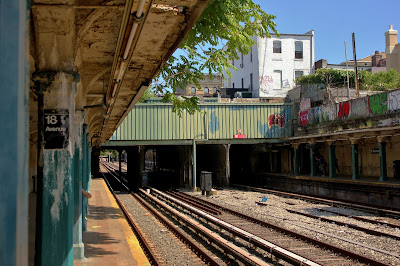 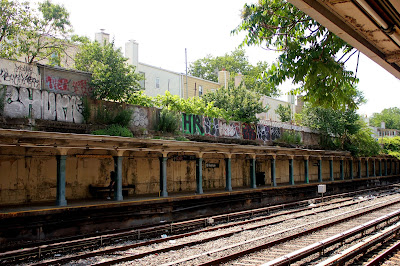 Posted by onemorefoldedsunset at Thursday, June 25, 2015