You rows of houses! you window-pierced façades!
you roofs!
You porches and entrances! you copings and iron
guards!
You windows whose transparent shells might expose
so much!
You doors and ascending steps! you arches!
You gray stones of interminable pavements!
you trodden crossings!
From all that has been near you I believe you have
imparted to yourselves, and now would impart
the same secretly to me,
From the living and the dead I think you have peopled
your impassive surfaces, and the spirits thereof
would be evident and amicable with me. 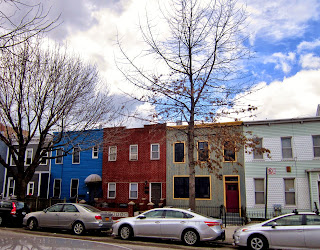 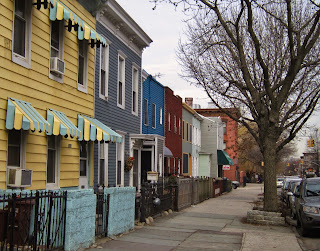 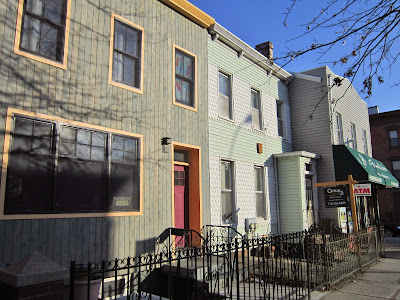 I always like passing by this group of wooden houses between 16th & Prospect. They're pre-1880 buildings, and they make up an interesting collection of old-style & new facades: the vinyl, the brickface, the period re-fit, the spare contemporary.  My favorites are the two bookends.  Thumbs up to the cheery blue and yellow color scheme at one end, extended even to the awnings & the front wall. A house where it's perpetually spring!  And next to the deli, the house with its white & pale green semi-scalloped facade makes its own, quieter statement.  There's personality here. (To defy my reputation as a perpetual mourner of things passing/things past, I'll add that 560, the most modern of the bunch, is a pretty good-looker of its kind, and in some respects favorable to a period do-over.  Can you go back again?  I'm not sure.)

I didn't know the elderly man who lived at 558 Sixth, but we did exchange hellos sometimes, and he always seemed gentle and kind.   A while back a handwritten note appeared in a window.  It gave a number for enquiries, & it seemed to suggest the property was up for sale.  Yesterday I saw a Century 21 sign outside.  I googled the listing, but before I got to it up popped a Curbed post about the house that was shockingly mean-spirited & offensive.  I won't even quote from it here, but you can follow the link if you want.  Sure the interior of the house is worn, but it belonged to someone of advanced age (no longer around) & likely of modest means. And it was a home.  These are the very rooms where a long life was lived, where someone ate, drank, slept, wondered.  From where an unimaginably different world outside the window was seen unfolding, year by year, decade by decade.  It still feels the presence of ownership, & even if run-down & not to your taste, the house and the life deserves respect. The price?  No less nuts, perhaps, than anywhere else in this Looking Glass market, but still a better deal than a box of a two-bedroom condo for the same price or more.  In the past buyers might take over a house like this gently, and with plenty of do-it-yourself spirit & not a lot of cash, turn it into their own home bit by bit - cleaning, repairing, fixing walls or ceilings, painting, putting in a bathroom, doing up a kitchen, replacing windows as funds allowed.  They might bring in experienced help only for the big jobs they couldn't manage alone. These days, with the sums involved, a sale results most likely in a gut-job or demo, with an attendant army of architects, contractors & hired labor.

The real estate scene gets ever more ugly as even the most humble of properties becomes a prime target.  There's little tolerance for difference, be it a difference of age, income, ethnicity or taste.   Instead, we witness a winner-take-all march to uniformity.

Let's save the snark for the fat cat developers and the fraudulent landlords, for euphemistic realtor-speak & tacky displays of conspicuous wealth.  Let's leave the innocent alone. 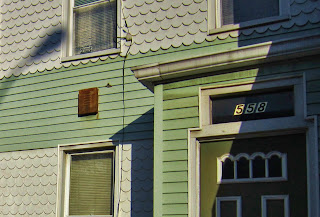 And to those Curbsters wondering where the bathrooms were?  I'm betting on tubs in the kitchens.


Posted by onemorefoldedsunset at Sunday, April 12, 2015