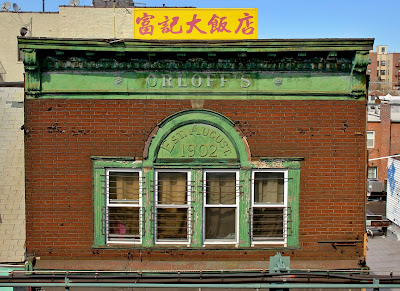 The platform of the Bay Parkway D (northbound) has a seat directly opposite the building. You might just want to skip the incoming train & stick around.  There's the past up close & in your face - all to yourself, above the shopping crowds on 86th.  Have you ever seen the month of establishment inscribed on a building?  I certainly hadn't before this one.  What pride of ownership that single word August suggests. 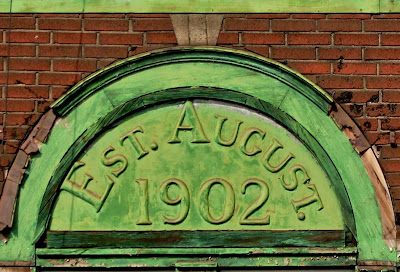 I wanted to find out something of Orloff's history, and one of the first things I came across online was a treat. In response to a photo of the building at the blog Eating in Translation:  the best possible comment:

My great grand father, Henry Orloff (translated at Ellis Island from Khuny Ortleyevich) born in 1869 in a Jewish Settlement in the Ukraine, emigrated to the United States in 1885. In 1900, he is a feed dealer in New York. He built a store in 1902. He is established as a shop keeper in a building he built called the Orloff Building. It was used for several purposes including the housing of horses. Henry owned several properties around New York and would take his grandchildren around whenever they would visit. My father, same name, told me about this building with pride.

Henry & his wife Dora (also recorded as Ona in the 1930 Census) had three sons & one daughter.  At an archive newspaper site I found that one of the sons, Walter, made big news in the local press in 1933, when he was released from Nazi authorities after imprisonment for "alleged Communistic activities":

Walter Orloff, Brooklyn medical student who felt the iron hand of the Nazi Government while in Germany, was officially welcomed back to Bensonhurst last night by a crowd of more than 4,000.
Failure to gain admittance to the packed clubrooms of the Paola Democratic Club, 2211 86th Street where the celebration was held (the Orloff's building pictured above), the crowd about the doors overflowed onto the elevated structure, from where it was possible to see into the club, and hear the speeches by means of a loudspeaker hastily installed on the street.

The returning student, who had faced a sentence of up to seven years, but was released after a few weeks, spoke only briefly to the crowd, and urged them not to condemn all Germans for what was happening in Germany.  Rabbi Louis B. Michaelson, of the Coney Island Jewish Center, had a contrary opinion, however, and "decried Germany's return to barbarism." The Orloff family was honored (and declared free from "Communistic taint"), speeches were made by democratic club members & local dignitaries, & messages read from Governor Lehman & other politicians.  A forty-piece band from Our Lady of Peace, in Manhattan, supplied music.

Henry Orloff lived only six years longer.  An Eagle article from 1939, detailing his estate, gives his profession as real-estate broker.  His children are listed as the beneficiaries, with the biggest share of the estate going to his daughter.  One son, Carl, is set to receive ten dollars.

Think of the crowds, up there on the train platform in 1933, listening to the band and the speeches, and straining to look through the buildings' windows.  Think of that same view available eighty years later.  The circumstances are less dramatic, but still quietly heroic.  Even flanked by a Petland Discount and a Baypkwy 99 Cents Discount, Orloff's has held its ground. 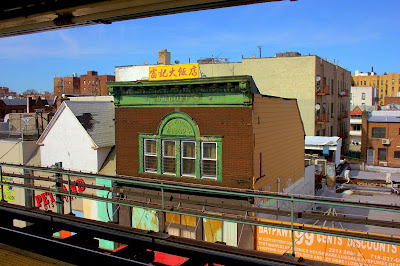 Posted by onemorefoldedsunset at Sunday, April 19, 2015