In the annals of city development this is minor stuff, but at every level one finds discrepancies between plans & actions.  The permit approved at 540 Fifth is for "2nd - 4th floor vertical enlargement on an existing one-story commercial building."  There's nothing in the plans for demolition of said one-story building, which quietly disappeared this spring.  I noticed the gap a while back, and went by today to take another look.  When I first passed 540 the fence was up: 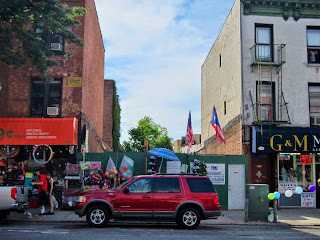 but a few minutes later - miracle of miracles! - it was open, allowing a clear view of construction action. 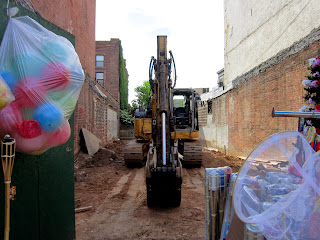 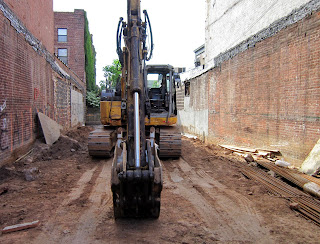 At the sides of the lot you can see the outline of the demolished structure. Not a significant loss, perhaps, but still. Who keeps an eye on this stuff? And how many more sites like this seem be of scant interest to officials?  At the DOB website, there are two complaints for illegal work, but no record of any follow up. In fact, the second complaint has been dismissed as a mere duplicate of the first.


Posted by onemorefoldedsunset at Monday, June 09, 2014