Of the Tribe of Tiger 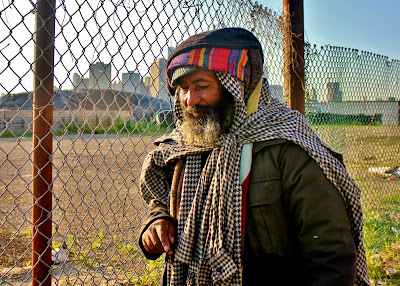 Between Degraw & Kane, Columbia Street in summer. A steady stream of cyclists and joggers, trim and freshly tanned, make their way along the Greenway path. Through the chain link fence next to it is the weedy site of a future park, and beyond it, Port Authority dockland.  Beyond that, the view that all Brooklyn developers crave a piece of.

Each day, on a strip of grass between joggers and chain link, with the glittering skyline at his back, Eshete Woldeyilma tends his family of cats.  Eshete came to New York from Ethiopia via Sudan as a political refugee in '82.  He began training in office technology, but ended up working in construction, and was seriously injured on the job.  Money came, and money went, as it does.  After living at a variety of addresses, he found an apartment on Columbia, and lived there for twenty-one years, until his eviction several years back.  Now he has a room in an SRO in midtown and travels back here daily, on foot or by bike, to guard and feed his charges.  The current bike is child-sized - not the most comfortable, he confides, but sturdy at least.  This time of year he gets to his spot by late morning and leaves around nine p.m.

Eshete is still well known in his old neighborhood, and (by those that take the time to talk to him) well loved.  Passers by greet him, and he's often at his post in the company of other long-standing residents.   Sometimes he gives up his chair for a friend, or a visitor sits down on the grass beside him.  From some of his friends I've learned about the Columbia Street of the past, when blocks of houses stood on the now empty parkland to-be, and heard stories of prison, addiction and redemption. But kindness always radiates here.  Last time I saw Eshete a man crossed over from his apartment building nearby to say hello.  Gilberto, an admirably spry 89 year old artist, & World War II veteran, was checking to see if Eshete had enough drinking water, and stopping to chat for a while. Farther down Columbia, a cafe worker told me what a good listener he was, and how easy he made it for him to open up in conversation.  And yes, Eshete is a pleasure to spend time with, as curious to learn about you as he is to talk of his own affairs.  Despite hard times, he has a mellow, easy charm, and makes his daytime patch of home an oasis of cultured urbanity. We've discussed the literary greats - Dickens, Shakespeare, Tolstoy, Wilde - and political affairs in Africa, with both of us expressing admiration for the late Julius Nyerere.  We've talked about the ache for a homeland that can never be summoned back from the past, and the greed and indifference that drives New York today.  But mostly we've talked about cats.

The cats' territory extends deep into the port area , and you may not see them if you pass by in the daytime, but by early evening, one by one, they emerge from the shadows and make their way across the empty plain and through the fence to wait for supper.  These are a tough and handsome brood, and each has his or her own particular wiles and charms.  They're also blessed with glorious names and pedigree.  To the novice, the family tree is a little confusing, even though Eshete is patient with explanations, and writes down an annotated roster in my notebook.  Consider these beauties.  Here today: Miss Ethiopia, the Rocket Girl - mother and speedy warmonger, Nubia - father and center of the family,  George Washington - long-haired and virile, Porto Rico - a talkative and calculating trickster, Damascus - sweet and loving, and Congo, a dark and violent fellow, most sensitive of all the cats.  Departed from the world:  Mrs. USA,  the most beautiful Addis Ababa,  the genius Mogadishu, & Vienna, friendly & fearless. 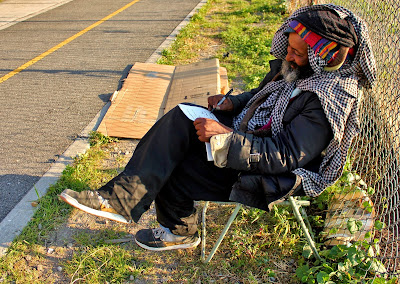 But there are more, and these young cats are missing:  Albert Einstein, Princess Diana, Castro and Patrice Lumumba.  Youngsters, no more than six to twelve months old, they were taken in March to be found new homes, with his blessing, but Eshete believes he's been purposely misled about their placement.  He has no idea where they've ended up , or even if they're alive at all.  This is the source of heartbreak.  This fills his nights with anxious dreams, and colors his days with mixed emotions. Some days he feels sure of a happy resolution, but on others he is utterly hopeless.  And an underlying resentment at the way he and his young children have been treated eats up his soul.  He writes about this on a series of unfolded cardboard boxes which he shows me and asks me to photograph. 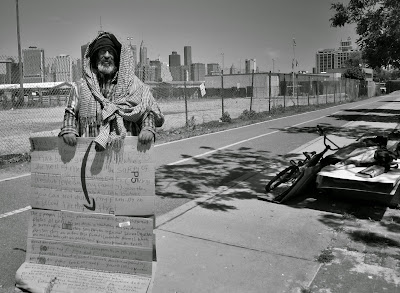 I am too heartbroken, too devastated, and too hurt beyond words since they took my four baby cats ... I raised these baby cats with tremendous sacrifice in this harsh and too cold winter, with their supermother, Miss Ethiopia, the Rocket Girl.

Tonight, by the time the cats get to eat, the waterfront is filled with soft golden light.  That skyline view looks more of a prize than ever.  Some of the cats nudge in together companionably as they work on their meal, while others hang back more cautiously.  Eshete, distracted from his youngest children's fate, beams at his family, and celebrates their freedom of spirit:  "You can't really own them, or know them.  You can't control them."  Eshete, like his cats, is the noblest and proudest of survivors. 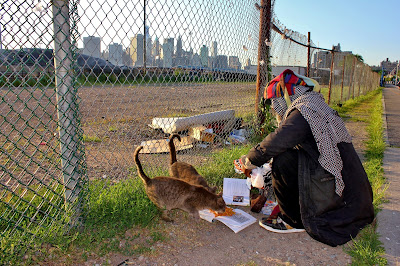 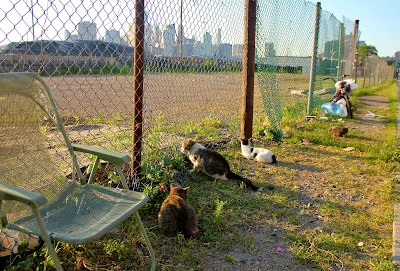 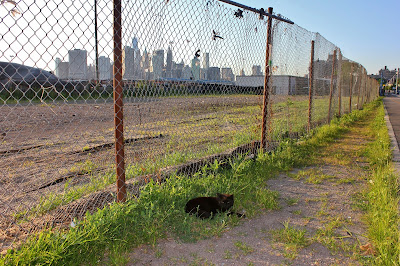 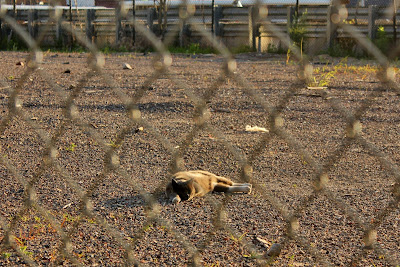 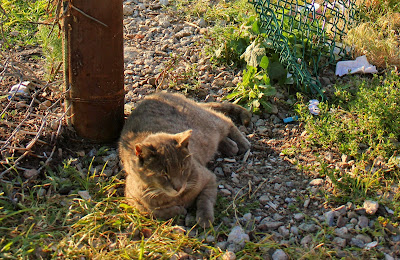 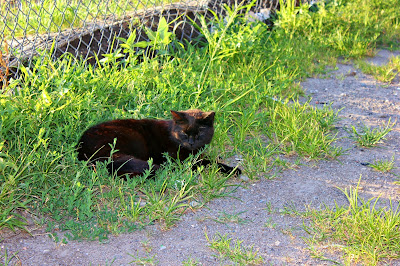 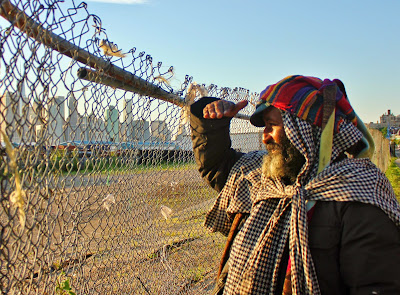 Posted by onemorefoldedsunset at Wednesday, June 25, 2014