I seem to stuck be in a 40s holding pattern, shuffling south a block or two, and circling north again.  I love walking around here.  On 43rd, between Third & Fourth, there's an unusual row of large, detached frame houses, set far back, and high above street level. I was there a few weeks ago and again last week, when I noticed some kind of work in progress at 332. The owners got a demo permit back in 2012, but have not secured approval for a new apartment building, and appear to be going for alteration work instead. 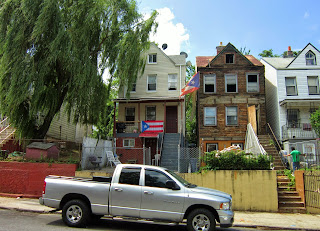 At right below is the kind of pleasure dome that might have taken its place, and next to it, a brick facade job that I hope is not serving as inspiration to the 332 owners. 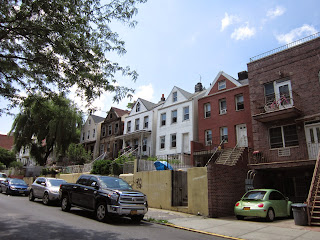 These houses caught the attention of Montrose Morris, who wrote an interesting Brownstoner piece about them back in February:


Fourth Avenue has become a dividing line between the very late 19th and early 20th century development of the rest of Sunset Park, and What Came Before. Crossing the street is entering an architecturally different world, where the area’s industrial and residential paths cross.
Sunset Park, the park itself, sits on one of the highest ridges of Brooklyn, and affords an incredible view down to the harbor and piers of the old Bush Terminal, and beyond. The hill rolls down from the park to the shore, and the houses on Sunset Park’s streets stair step down the hills, one of that neighborhood’s most charming and picturesque features. When you look at the houses on 43rd Street, between 3rd and 4th Avenue, it’s easy to see some of the changes in Brooklyn’s topography.
These houses are early, in terms of this neighborhood’s growth. The 1888 map of the area shows that this group of wood framed houses is the largest singular block of development in the area. Groups of speculative wood framed row houses are bunched here and there on the surrounding blocks, but none are as large as this; a group of fifteen buildings.
Morris suggests that these buildings are "off the grid" for buyers looking east of Fourth, but I wonder how long it will be before the border shifts an avenue west, with the BQE becoming the house hunter's outer limit.  We live in voracious times.  At any rate, these are fine looking houses, on a block is anchored on Fourth by two Sunset Park landmarks: (the closed) St. Michael's parochial school, and the long shuttered police house & stables.  And what a beautiful willow tree.
Posted by onemorefoldedsunset at Friday, June 20, 2014