Overlooked on one side by IKEA, and the Red Hook Houses on the other, the area's new private school, Basis Independent TM Brooklyn, is rising.  According to a BASIS website, the average construction time for a new school building is 115 days: 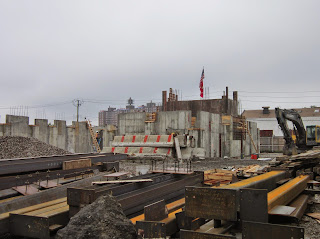 The planned opening date is September. You'll have to wait until 2015 though if you're a "self-pay"client needing the "upscale rehabilitation" services of Urban Recovery House, which will operate nearby on Beard Street.

"Mosberg and business partner Johan Sorensen called Red Hook perfect for their holistic rehab model, which they compared to Promises and the Betty Ford Center, both in California, where celebrities like Lindsay Lohan have gone to dry out.
Patients who visit the five-story, 20,000-square-foot center would be charged “tens of thousands of dollars” for four- to six-week stays on the truck-heavy block, which is just around the corner from Fairway Market." (Daily News)

On the business website, we read that:
"Red Hook sits at the southern edge of Downtown Brooklyn, making it the only neighborhood in New York City with an unobstructed view of the Statue of Liberty. It has limited public transportation, yet extremely accessible due to its close proximity to everything. Simply put, Red Hook is magical as a serene environment nestled in an urban area with a strong recovery support network perfect for URH and its recovering patients."
Posted by onemorefoldedsunset at Wednesday, June 11, 2014