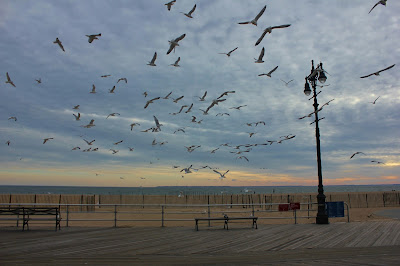 Waterfront Events (Waterfront Alliance)
New York Harbor offers so many ways to have fun and explore our waterfront. Head out on the water for kayaking or sailing trips. Learn and get involved through conferences, or workshops. Bring family and friends for lively festivals and holiday celebrations.

Gloria Nicholson: Memories of growing up in a Jones Walk rooming house in 1940s Coney Island
(Coney Island History Project)
Gloria Nicholson was born in Coney Island in 1940 and grew up in a rooming house that her mother Josephine Boyce managed on Jones Walk and the Bowery. It overlooked the Virginia Reel and Wonder Wheel, which she often rode.  During the summer her father Sakazo "Tish" Tashiro managed a scooter ride owned by the Handwerkers and located next to Nathan's. She reminisces about unusual attractions and the cast of characters who populated her childhood including Ned Tilyou, Tirza's Wine Baths, Shatzkins Knishes, the Shark Lady, and fortune-telling myna birds.

New N.Y.C. Transit Head, ‘Obsessive About Detail,’ Takes Charge (WSJ)
He is aware of the political battles going on around him, but he says his job is to give professional advice. “I am determined in this job to maintain my integrity and to speak truth to power and not to compromise my principles,” he said.

Turnaround: Fixing New York City's Buses (Transit Center)
Fixing the bus system in New York has never been so urgent. If the MTA, the NYCDOT, and the elected officials who represent riders can find the courage to tackle the problem, New York can reverse the bus system’s decline and reclaim its place as a center of transit innovation and leadership, locally and worldwide.

Your Train is Delayed.  Why? (NY Times)
New York City subways have the worst on-time performance of any major rapid transit system in the world.  This is the story of how we ended up in a state of emergency.

Why Did the EPA's Gowanus Canal Pilot Dredging Program Damage a Building? (Brownstoner)
The first steps of the Gowanus cleanup have not gone according to plan.
At a meeting for the Gowanus Canal Community Advisory Group last Tuesday, Christos Tsiamis, the EPA’s project manager for the cleanup, announced that the contractor had run into some issues installing bulkheads at the 4th Street Basin, which are necessary before the dredging can begin.

A Correction Officer’s Conviction Signals Deeper Troubles at Brooklyn’s Federal Jail
(City Limits)
Last Friday, Carlos Richard Martinez, a former lieutenant and corrections officer at the Metropolitan Detention Center in Brooklyn, faces life in prison after being found guilty on 20 counts, including sexual abuse and deprivation of an inmate’s civil rights.
The indictment is the latest episode in the saga of Brooklyn’s largest jail, which has attracted attention over allegations of poor conditions and a track record of sexual abuse, as brought to light in investigations by advocates and media, and documented in countless legal testimonies over the past several years. But if the trial of Martinez has reached an end, the case has only added grist to a growing outcry over conditions at the MDC, and the failure to prevent sexual assault both there and nationwide.

Amazon fulfillment centers don't boost employment, analysis finds (Guardian)
States and cities have fallen over themselves to offer huge tax breaks to Amazon in the hope of securing one of the tech giant’s order fulfillment centers. But an analysis of the impact of the centers released on Thursday found the facilities do not boost overall employment in the counties where they open.

Beattie Orwell, Centenarian (Spitalfields Life)
A magnanimous woman who delights in the modest joys of life, Beattie is nevertheless a political animal who is proud to be one of the last living veterans of the Battle of Cable St – a formative experience that inspired her with a fiercely egalitarian sense of justice and led to her becoming a councillor in later life, acutely conscious of the rights of the most vulnerable in society.

So Long, Milly Rich (Spitalfields Life)
I am from the last place I have lived! But I was born at 19 Commercial Rd on October 23rd 1917, which of course was during the First World War and my mother, Leah, told me that the air raid warnings were sounding at the time. People were terrified of air raids but my she had a basement under her shop in Commercial Rd where she took shelter.
My mother made corsets and she taught me to make them too. Corsets were a vital part of a lady’s outfit in those days because – of course – smart clothes needed a good foundation and a good foundation was a nice heavily-boned corset with a strong steel bust in the front. Everybody had remarkably good posture, not slumped – like you see today – over a hand-held computer.

Eva Frankfurther, Artist (Spitalfields Life)
There is an unmistakeable melancholic beauty which characterises Eva Frankfurther‘s East End drawings made during her brief working career in the nineteen-fifties. Born into a cultured Jewish family in Berlin in 1930, she escaped to London with her parents in 1939 and studied at St Martin’s School of Art between 1946 and 1952, where she was a contemporary of Leon Kossoff and Frank Auerbach.
Yet Eva turned her back on the art school scene and moved to Whitechapel, taking menial jobs at Lyons Corner House and then at a sugar refinery, immersing herself in the community she found there. Taking inspiration from Rembrandt, Käthe Kollwitz and Picasso, Eva set out to portray the lives of working people with compassion and dignity.


Posted by onemorefoldedsunset at Saturday, February 03, 2018