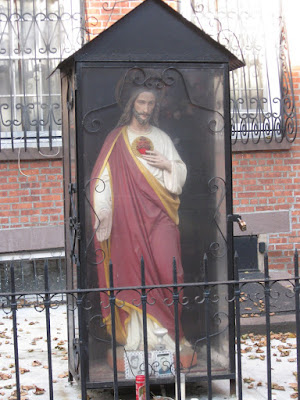 Roland Antiques Leaves the City (Vanishing New York)
When I visited as they were sadly packing up, an employee told me, "Unless you're Christie's or Sotheby's, you can't stay in the city anymore. The rents are too high."

The life and death of Willets Point (Nathan Kensinger at Curbed)
The last auto body shops in the Iron Triangle are largely hidden from the view of passing traffic along interior avenues that are now blocked off by abandoned cars, truck trailers, and household debris. Owners report that business has plummeted by as much as 60 percent, with many customers assuming their shops have been demolished. For those still working in the heart of the Iron Triangle, conditions have gone from severely blighted to near-apocalyptic.

Signal Problems - A great weekly update on subway news from Aaron Gordon, who writes on transit for the Village Voice

No good news for DNAinfo, but Gothamist is returning (WNYC)
In a deal largely funded by two anonymous donors, WNYC is acquiring the news site Gothamist, including its archives, domain name and social media assets. The move comes as part of a larger deal involving two other public radio stations and Gothamist's network of local news sites. KPCC in Pasadena, Calif., will take over LAist, while WAMU in Washington will acquire DCist.

Glenda Jackson on Quitting Parliament, Playing Lear and Returning to Broadway (NY Times)
The fact that she was a woman playing a man (in Lear )turned out to be a nonissue. “What interested me,” she said, “was that as we age, those seemingly unbreakable barriers that define us, our gender, they begin to crack, to blur; they’re not absolutes anymore.”
As for how she shapes her character, “it’s all in the text,” she said. She does little if any research on a part beyond reading the script again and again and again. When she showed up for the first day of rehearsals of “Lear,” she had already memorized her lines.

'What a performance gender is!' – a century of cross-dressers (Guardian)
Looking at these amateur images (although the word amateur does not always seem quite right), we become implicated as soon as we begin to imagine their stories. These photographs celebrate lives and desires, possibilities and necessities. The images were made to be looked at, we imagine, by their subjects, giving their self images a greater validation, affirmation and confirmation than the mirror alone can provide. The photograph is a mediation between the self and the world, as symbolic as it is a record of a moment and a state of being.

All this week, beautiful images of strong women at Spitalfields Life.  Here are the Women of the New East End, but check out the rest.
Contributing Photographer Sarah Ainslie took these portraits of women in Hackney as a commission for Hackney Museum. “I was aware there were a lot of women in the workplace but mostly in behind the scenes roles,” Sarah explained to me, “I wanted to give them visibility and also show the variety of work that women were doing.”

Virginia Woolf Was an Avid Photographer—and Now You Can See Her Work Online (artnet)
“From the age of 15, photographs framed Virginia Woolf’s world,” wrote Maggie Humm in her 2003 book Modernist Women and Visual Cultures: Virginia Woolf, Vanessa Bell, Photography, and Cinema, excerpted in the Guardian. “Throughout her life she wrote about photography in her diaries, letters and essays, and used photographic terms descriptively in her fiction.”

Posted by onemorefoldedsunset at Saturday, February 24, 2018