Hamilton Plaza and part of the Lowes site stand on the ground of the old Metropolitan Gas Company. A small gas plant is indicated on the Hopkins map of 1880, right at the same location as the supermarket.  The plant quickly expands, and by 1903 has also taken up space on the southern side of the block.

A Brooklyn Eagle article of 1911 - Active Industrial Region In Vicinity of Gowanus Canal, Ninth Street and Hamilton Avenue - describes the rapid pace of industrial growth in the immediate vicinty 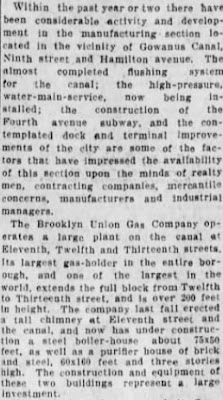 According to the New York State Department of Environmental Conservation, gas manufacturing prior to 1915 was coal-based, after which time the plant was converted to a carbureted water gas process.  A Belcher Hyde map from 1916 shows the layout of the plant.. 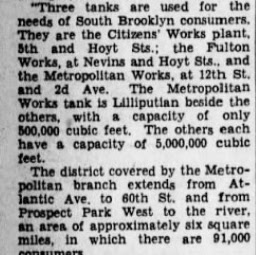 By the late 1930's only the storage tank structures remained; production at the site had been discontinued. 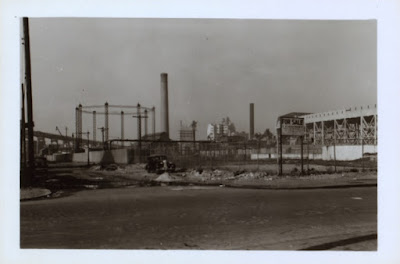 
Here's a view of the corner today. 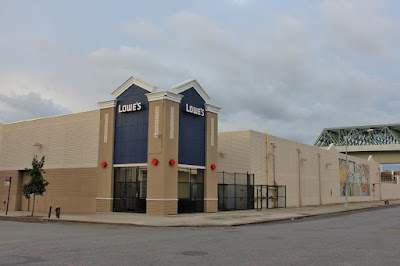 Though the Metropolitan storage tank(s) may have been "Lilliputian," and gas production discontinued long ago, under 12th Street there's a still a hefty piece of gas company history.  One of the biggest gas mains in the borough runs up the slope from the canal.  Like the rest of the city's infrastructure, it's getting on a bit by now.

For more on this part of Gowanus, including more of Sperr's work, read here.
Posted by onemorefoldedsunset at Thursday, February 01, 2018