We can't resist another Brooklyn Union Gas tank. It's at the Citizens' Works plant, at Fifth & Hoyt Streets. The photograph was taken by P.L Sperr in the summer of 1937, from Smith and 5th. The resolution isn't too good here, but what a shot.  Just look how the tank looms over that run of small wooden houses - presumably it's one of the "mammoth" ones the Eagle referred to. 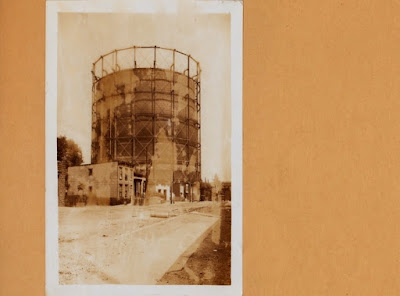 Sperr's notes indicate the houses as nos. 11 to 21, but he's sometimes inaccurate with numbers and street names.  I think the house at left could be no. 13, not 11.  At any rate, only two of the houses in the photograph - 13 and 15 - still stand today.

Posted by onemorefoldedsunset at Friday, February 02, 2018