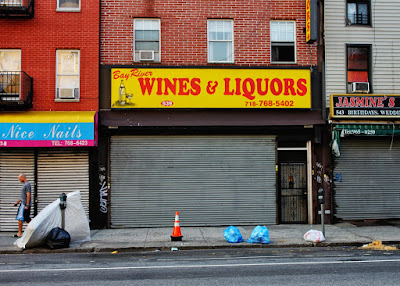 Bay River Wines & Liquors changed hands in 2014, and the new owners told me back then they were planning to change the store sign.  Four years on, the new sign is finally in place. 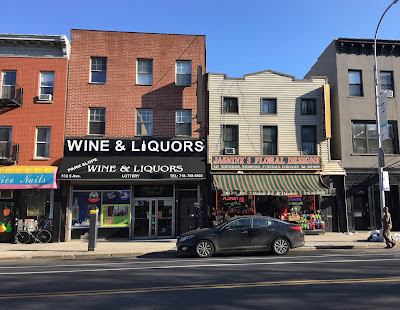 The earliest Bay River references I've found date from 1934, in Brooklyn Eagle  liquor store ads.  The business is listed as both the Bay River Wine Company, and the Bay River Wine & Liquor Store.  But it's not at its current address; it's several stores south, in the building that now houses Crunch. 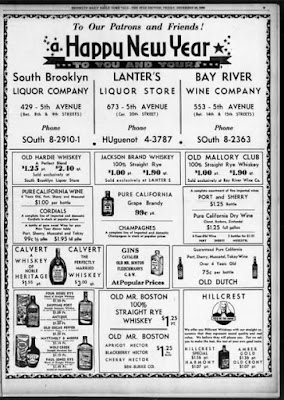 What a lot of Olds in the ad. above.  Of the two other stores listed there, Lanter's is now Bklyn Clay, and the South Brooklyn Liquor Company is likely today's Prime Time Liquors (a fine name), one door up from 429.  There are also other references in the Eagle to a Bay River Wine Co., presumably the store on Fifth, or a business operating in tandem with it.

Notice is hereby given that the Bay River Wine Co. Inc. of Brooklyn, New York, has registered its trademarks "Old Mallory Club," "Spring Hill," "Spring Farm," and "Bay River" with the Secretary of State of New York, to be used on labels, and on bottles, barrels and receptacles, containing gin, whiskey, brandies, cordials, vodka, cocktails, rum, champagne, distilled wines, distilled liquors and alcoholic beverages of every description.  (1935)

In 1947, a couple more trademark names pop up: "Fior de Casa" and "Kenny," both "for use on receptacles containing alcoholic beverages of all kinds." Wouldn't it be nice to head to the liquor store to pick up a bottle of Kenny?

Though it's uncertain when the Bay River company was founded, its president, Anton Berger, was around on the liquor scene early in the century. In 1909 a salesman of the same name was fined $100 for selling a bottle of whiskey to a Barrier Island resident, without paying the required revenue tax.  Undeterred by this little run-in, Berger clearly had alcohol ambitions. In 1919 he was named as a co-director of the Medicinal Wines & Spirits Corporation of Brooklyn.  In order to get around Prohibition regulations, the company's official plan was to supply drug stores with "medicinal" liquor, only sold to customers arriving with a doctor's prescription.  Around the same time Berger was also involved in the building trade. By the 1930's, Berger, mustached and on the portly side, appears to have become a stalwart establishment figure, chairman of the Men's Club of the Bay Ridge Jewish Center, Congregation Sheiras Israel, and chairman of the Center's board of trustees.

As a regular, but not a frequent customer, I haven't noticed much change in the Bay River/Park Slope store since 2014.  It's still unpretentious, and it still serves a mixed crowd of customers.  I liked the elderly couple that used to run the place - a sometimes sweet and sometimes curt or jokey pair -  but the new owners are friendly too.  I'd often run into the sock seller at Bay River.  He'd been in poor health for a long time, and in recent years had trouble walking.  Over time he became a sadder and sadder figure, and I could hardly bear to see him sitting on Prospect Avenue, waiting hopefully for drive-by customers. 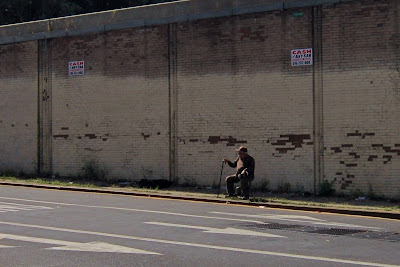 The last time I saw him, a year or two ago, he was in very bad shape, and I gave him some money towards a prescription.  I never saw him again.  I'm assuming the worst, but if anyone has any news about him, I'd like to hear it.

Update (3/7): I went into the liquor store a few days ago, & a woman working there told me that the sock seller has been ill, and in the hospital.  She said he's "doing a little better now."
Posted by onemorefoldedsunset at Thursday, February 22, 2018

I last saw the sock seller in the Fall of 2017 - if indeed it's the same one you mention. This one will stand near the Chase bank on 5th. My hope is that he's just taking the winter off and come out again once it's a little warmer.

Thank you Sigrid - I'm so glad to hear this! I'm on Fifth all the time, but haven't seen him for such a long time. I guess it was last winter, and he was very sick. I'll keep an eye out.

I swear I've seen him within the last few months. He was still up and moving, which is better than a lot of elderly folks. Hopefully he is well and is just staying inside keeping warm.

Great - thanks. He's been around Fifth for decades. Maybe I've been inside a lot too!

Anton Berger was my great grandfather, I didn’t know much past the fact that he ran Bay River Wine. Thanks for the history!