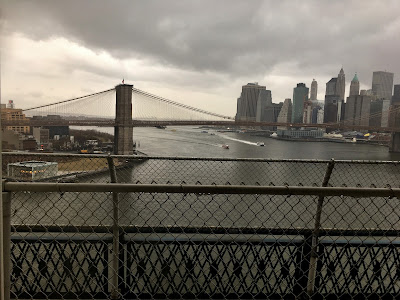 
The Efficient City’s war on the Romantic City… (Current Affairs)
The Romantic city is a democratic city: everyone has their little piece of it, nobody can simply reshape the entire place in accordance with their preferences. But the emerging version of New York City is a place where a disproportionate amount of power is held by landlords and developers, who can essentially do as they please.

Valentine's Day/Ash Wednesday: Musings & Photos  (photographer Larry Racioppo at Brooklynology)
Today is the first time since 1945 that Ash Wednesday and Valentine’s Day fall on the same day. This rare occurrence has made me think about the significance of each day and what they symbolize: Ash Wednesday – death, Valentine’s Day – romantic love.

Tokens of unrequited love? Thames yields 'crooked coins' tossed in by romantics (The Gentle Author at The Guardian)
During the reign of William III, in the second half of the 17th century, it was the fashion for a young man to give a crooked coin to the object of his affections.
The suitor would bend the coin, both to make it an amulet and to prevent it being reused. If the token was kept, it indicated that affection was reciprocated, but if the coin was discarded then it was a rejection.

A survey of Canal Street’s changing landscape (Nathan Kensinger at Curbed)
Canal Street should be one of New York City’s greatest thoroughfares. It’s lined with a pleasant mix of unique buildings; it passes through several thriving neighborhoods and historic districts; and it houses dozens of small mom-and-pop businesses, many of which have been there for more than 50 years.
Instead, Canal Street is currently one of the city’s worst commercial streetscapes, blighted by empty storefronts and an array of increasingly generic new buildings. A walk along its entire 1.4 mile stretch, which runs 26 blocks from West Street to East Broadway, reveals a grand boulevard in crisis, with its street life choked out by real estate speculators, and traffic so bad that transit advocates have taken to calling it “Manhattan’s Boulevard of Death.”

AECOM & the Chamber of commerce want to tell us how to live, an essay by George Fiala (Red Hook Star Revue)
What disgusted me was the glib smugness at which these chamber of commerce types toasted themselves for recognizing the hidden billions to be made simply by transforming a longshoreman’s operation into a stand of gleaming skyscrapers full of luxury condo apartments.
The speeches began with Chris Ward stating what he has told me in person that the AECOM plan that includes 45,000 new apartments in buildings scattered along our shoreline was simply a conversation starter.

How One Subway Closure in Queens Wrecked a Community - And what it could mean for the upcoming L train shutdown. (Vice)
... if you stare down 30th Avenue from its eastern or western ends, you’ll notice that residential and commercial energy flows from a power center: the 30th Avenue N/W subway that runs through its center. Where businesses are located roughly follows the paths where residents walk to, and from, the subway. The morning and evening rush hours there remind me of this scene from the ethereal film Baraka of Shibuya crossing in Tokyo , where it looks as if the station itself is a beating heart, pumping people in and out.
Actually, let’s keep going with that heart metaphor just for a second. Because since the 30th Avenue station shut down in late October for eight months, the businesses here have gone into nothing short of cardiac arrest.

How Did We Get Hooked on Plastic? (BBC)
The story of how the search for a material to replace ivory changed our lives forever. In the 19th century a billiard ball company placed an advert in a newspaper offering $10,000 to anyone who could come up with a substitute for ivory. There was growing concern that companies were hunting elephants into extinction so they could use their ivory for billiard balls, buttons and umbrella handles. The story that follows takes us from explosive factories that often went up in smoke to the modern world we find ourselves in today. How did plastics go from being a saviour of the environment to a cause for concern? How did we get hooked on plastic?

Every Bottle Counts – A Photo Essay on Brooklyn’s Chinese Grandmas Who Collect Returnable Containers (Feet in 2 Worlds)
“It’s a tough job, my hands have bruises, and it’s smelly. My kids don’t want me to do it. They are ashamed. But they are working so hard, their lives are hard. I want to do whatever I can do to help,” said Grandma Cheng. She relies on her children for support. She started collecting cans 3 or 4 years ago. She writes down the number of cans she has collected to remember and make sure that the recycling center does not miscalculate the numbers.

Enroll your building to receive a refashionNYC collection bin. (DSNY)
Tax receipts are available on the bin. Our partnership with Housing Works provides this convenient collection while fighting the dual crises of homelessness and AIDS. We’ll visit your building to discuss how many bins you’d like, what sizes are best and where they should be placed. Buildings simply call or email for a free pick up when the bin is full.

Posted by onemorefoldedsunset at Saturday, February 17, 2018