For today's Canal Month entry, we'll go local - to the Bay & the old Gowanus itself - and back in time to May, 1882.  In the Brooklyn Daily Eagle, under the general heading of "Transactions in Boats, Pig Iron & Junk" (a phrase that's already stuck firmly in my head), a story told with a certain flair:

This morning there was a salty flavor in the atmosphere of Justice Bergen's court room, which was owing to the presence of an unusual number of longshoremen and others who gain a precarious living by paddling about in small boats and dealing in junk.  A series of circumstances that required a judicial mind to determine their exact relation to the rights of property had caused the assembling of so many seafaring folks.  The first step in the investigation was the arraignment of two young men named John Riley and Patrick Dwyer, charged with the unlawful appropriation of a quantity of pig iron from the foot ofTwenty-fifth street, and its subsequent sale to a junk dealer who carries on business on board an old canal boat at the foot of Degraw street... 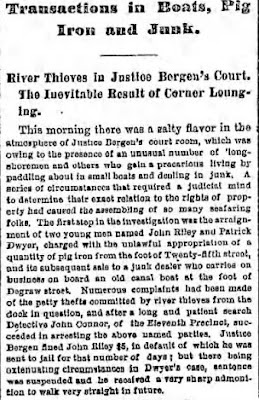 Posted by onemorefoldedsunset at Saturday, September 02, 2017