I got a little lost in the cemetery, and did the rounds of Cypress & Atlantic twice. Back at The Catacombs a blonde in a short black dress & heels appeared.  She could have been there for a funeral, I guess, but there was no air of mourning about her.  She looked like a good-time girl, heading for something exclusive and forbidden in a vault. I asked for directions, but she said she had no idea where she was.  She looked us up on GPS though, and this was enough to send me on my way.

I was in the right direction now, and soon enough I was walking Landscape Avenue, overlooking Sylvan Water.  I did a little detour to get closer.  From above, the mausoleums ringed around the water looked like glorified British beach huts. They summoned up wet bathing suits, goose-pimpled limbs, and towels gritty with sand.  The weather was better here of course, and the views were lovely, but I couldn't imagine even this deluxe location as a final resting space. No, it'll be a scattering for me, and I'm not fussed where, as long as it's not a cemetery. I've joked about locations with the family, but for some reason they're not amused.

A brace of hounds was lazing in the sun, listening to end-of-the-season block-party music drifting from across the lake. I sat between them for a while, then took the Margin Path that skirts Fifth.  The iron railings separate you (just) from life on the other side - a kid on a skateboard, aiming for cool, but stumbling and missing the mark, a father and baby and mylar balloon, and the source of the music, still unseen but getting closer.  How exotic and appealing the ordinary world appeared from here; how sweet a relief to get to the gates at last and slip right back inside it.. 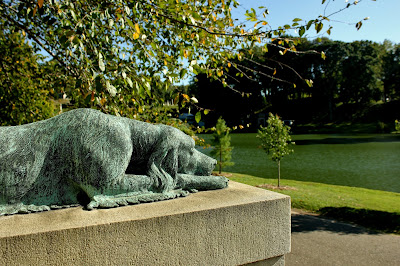 Posted by onemorefoldedsunset at Wednesday, September 27, 2017