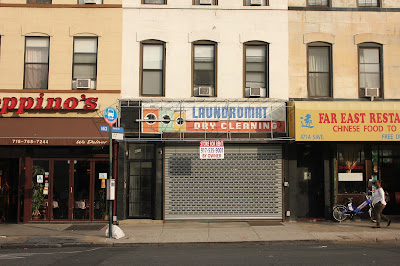 "Brooklyn Photographs" at BRIC Arts
Brooklyn Photographs brings together the work of 11 photographers who have turned their lens on the Brooklyn experience from the late 1960s to the present.  Each of these photographers will present a body of work on a specific theme – childhood in Williamsburg in the 1960s, Halloween in the 1970s, or Bushwick street life in the 1980s, to name a few.  More recent work from the last decade will explore such subjects as the rapidly gentrifying post-industrial landscape, Brooklyn artists, and the microcosm of street life visible near BRIC’s facility at the intersection of Fulton and Flatbush...
Photographers include: Yolanda Andrade, Stefanie Apple, Nelson Bakerman, Leigh Davis, Max Kozloff, George Malave, Meryl Meisler, Patrick D. Pagnano, Sergio Purtell, Larry Racioppo, and Russell Frederick .

Interference Archive is moving, building, and growing--and we really need your support to make our new, long-term home a reality. (crowdrise)

Apple of My Eye: The Urban Vision of Elaine Norman (City Lore)
“Simply strolling down any New York street can be a visual adventure and an endless opportunity for discovery,” she writes. “The City has an extraordinary capacity to blend past and present, high-brow and low, traditional and modern.” This vibrant, eclectic and constantly evolving architectural and cultural kaleidoscope has always been Elaine Norman’s passion and source of inspiration.”These days, I love using my iPhone because it gives me the freedom to capture the city in a new way. And my ‘darkroom’ is now an app on that phone, where I occasionally ‘develop’ pictures while riding the bus.”
The work on exhibit here – photography, photo-collage and more – spans over thirty-five years. Elaine has collaborated with City Lore since our first year – 1986.

Joe Brainard in 1961-63 by Ron Padgett (joebrainard.org)
By late December, thanks to Ted, he began sharing an apartment on East 9th Street with the poet Tony Towle. There, with more space, Joe quickly created a startling number of assemblages,
haunting, hallucinatory, and beautiful. One of them was built on a toy piano—it had only eight keys—painted baby blue, from which rose a gloved wrist holding an ice cream cone a snake was ascending, along with toy figurines of two Vikings, one of them climbing the wrist, which he gave (or sold for very little) to Frank O’Hara.

The Oscar Wilde Temple Opens Within The Church of the Village in Greenwich Village (Untapped Cities)
This month, The Russell Chapel within The Church of the Village has been transformed into a space honoring one of the earliest forebears in the struggle for gay liberation. The installation, entitled The Oscar Wilde Temple, is the creation of noted artists David McDermott and Peter McGough, and includes painting, sculpture, and site specific elements, recalling a time of “provocative sensuousness of the Aesthetic Movement Wilde championed.”

Frederick Wiseman’s “Ex Libris” - The latest work from the great documentary filmmaker examines the New York Public Library as it reconfigures itself for the digital age. (New Yorker)

Developers are closing in on Dalston’s local communities - Save Gillett Square (Huck)
“It’s like Coronation Street here,” says Moses. He’s been playing dominos on the site since it was a car park. “The only difference is, it’s unscripted.” Discussing the possibility of development, he tells me, “When they see something good, they just want to drop a stink bomb in it.”
Moses and many others were playing dominoes here long before the car park was transformed into what it is today. In those days, the only company they had was a police station that kept an eye on them from the other side of the lot. When the square was built around them, they stayed, and have been there ever since.

William Morris In The East End (Spitalfields Life)
Ultimately disappointed that the production of his own designs had catered only to the rich, Morris dedicated himself increasingly to politics and in 1884 he became editor of The Commonweal, newspaper of the Socialist League, using the coach house at Kelsmcott House in Hammersmith as its headquarters.
As an activist, Morris spoke at the funeral of Alfred Linnell, who was killed by police during a free speech rally in Trafalgar Sq in 1887, on behalf of the Match Girls’ Strike in 1888 and in the Dock Strike of 1889. His final appearance in the East End was on Mile End Waste on 1st November 1890, on which occasion he spoke at a protest against the brutal treatment of Jewish people in Russia.
When William Morris died of tuberculosis in 1896, his doctor said, ‘he died a victim to his enthusiasm for spreading the principles of Socialism.’

Posted by onemorefoldedsunset at Thursday, September 14, 2017