We can't celebrate Canal Month properly without adding one of our own personal canal moments. Here I am, with my mother and my two sisters, walking along the towpath of one or another Cheshire canals.  The two most likely possibilities, given where we lived and where my brother went to school, are either the Bridgewater or the Trent & Mersey.  It's a dreary day, and a bit nippy too, judging by the huge mittens that some of us are wearing.  I'm in a gabardine raincoat (hood up) and am dangling a doll from my hand.  This careless gesture is telling - I never had much time for dolls. Bears were more my thing.  The only dolls I had whose names I can remember were Annie & Suzie, and I wasn't especially fond of either of them. I still have a couple of bears from my early childhood though: Snowy, who I believe was a christening present, and Peter, who I got at Thornton Cleveleys one wet summer birthday.  At the wind of a key embedded in his back, Peter played part of "Teddy Bear's Picnic", and still did until just a few years ago. He's missing a lot of his hair today.

My next-up sister, six years older than me, and a bit of a 'tomboy', has a shortish haircut, and is wearing an anorak and tartan trews.  I got my own trews when I was a little older, though mine were narrower and stretchier, with stirrups.  I remember how stylish they made me feel. Our shoes are probably Start-Rites or Clarks.  Great attention was paid to shoe-fitting then, and a growth spurt meant sticking your feet in the store's X-ray machine to get measured.  It was quite an exciting experience really, though as we later learned, a horribly carcinogenic one. The machines were quietly removed from shoe shops by the end of the decade.  My oldest sister, ten years my senior, has on a shawl-neck winter coat, and shoes of a more adult nature. We all have very short fringes (bangs), no doubt the result of our pudding-basin home-style haircuts.

My mother was in her mid-forties when this picture was taken, and her hair was already turning grey. By this stage in her life she was a country woman, occasionally stepping in to do a bit of supply (substitute) teaching at our village school, but mostly resigned to a life of physically exhausting domestic drudgery. She was also active in community groups and volunteer work - helping run the mobile library, leading the local Women's Institute, and later working at soup kitchens and visiting the sick and elderly. It was all worthy stuff, but hardly fulfilled her talents. She kept her mind busy with books and cryptic crosswords. She had been a bright student in school - head girl and always first in her class.  Artistic & literary, she read English & French at university and was a skilled pen and ink artist, a gift she'd inherited from her father. Her father told me, just before his death, that he wouldn't let her go to Oxford or Cambridge - he saw them as too elitist - but elitist or not, she would have flourished there, just as she did in London, where she had a lively social life, and plenty of admirers. She was active on the home front during World War Two, serving as a volunteer fire warden, and she taught English in a secondary school. The staff and students at her school were evacuated to Keswick during the Blitz. The love of her life, to whom she was engaged, was killed in the war, and she married my father at war's end. They were eleven years apart in age. With marriage, she gave up her career, and the lively company she had once kept. She was, of course, a perfect sort of mother, inventive and merry and always encouraging, and (that dispiriting phrase) made the best of things, with good humor and vivacity, but oh, the thwarted potential.  She hid her frustrations with life well, for the most part, and never complained.  But we children recognized a brave face.

Where were we going on this chilly day?  Stopping off between a trip to Warrington or Northwich? Coming from watching my brother rowing for his grammar school? The presence of my mother's handbag suggests an outing of a formal nature. But there's nothing written on the back of the photograph, and two of the walkers are no longer here to tell us where they were heading.  And who took the picture? My father, I expect, with his old box camera, which seemed to require us striking formal poses for almost as long as Victorians.  I think it wasn't so much the camera, perhaps, that caused this, as much as his antiquated sense of composition.  This one's not quite as stilted as usual.  I suppose it could be my brother's work, but I doubt it.  From our mother and grandfather, he inherited a better eye, and hand, and was a finer photographer by far.

I've always loved canals, whether in their rural or their urban settings. As a child, if I couldn't be a Gypsy, I was pretty much set on living on a painted narrow boat. 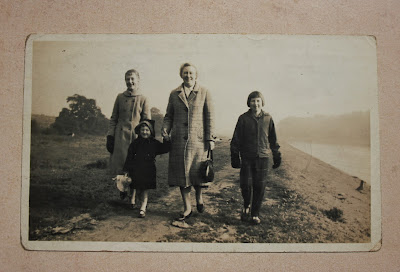 Posted by onemorefoldedsunset at Sunday, September 03, 2017