Film & Discussion on the BQX at UPROSE

Gentrification Express: Breaking Down the BQX

"Please join us for the premiere of a documentary film on the Brooklyn Queens Connector (BQX) streetcar. The film will be followed by a community discussion with the filmmaker. Popcorn will be served!"

Despite questions surrounding the BQX's economic and logistical feasibility, the Mayor and a group of mega-developers are determined to bring streetcars to the waterfront of Brooklyn and Queens. Critics of the streetcar project question its funding basis (predicated on raising property taxes in the neighborhoods the cars would traverse), its expense for local riders (developers still hedge on whether the streetcar fare system would offer MTA transfers), its location (in a flood-zone), and its convenience (many residents want improved local bus services, not streetcars). They also see it as a barely disguised tool of gentrification.  While BQX public relations suggest local approval for the project, both City & developers ignore the voices of many individual residents, business owners and community groups, all the way down from Astoria to Sunset Park, who are fiercely opposed to it.

There's still time to get involved.  Contact your local politicians, community boards, and local community groups, and let them know where you stand. 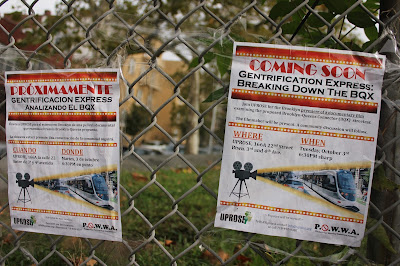 Posted by onemorefoldedsunset at Thursday, September 21, 2017