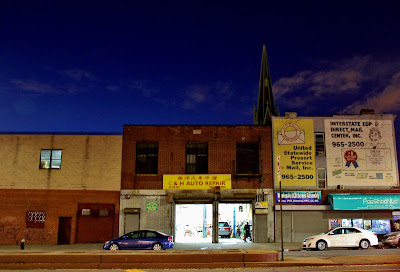 Our Lady of Czestochowa (from Fourth)


Getting to Zero: New York + Waste - an Open House New York series
Getting to Zero is inspired by the New York City Department of Sanitation’s 0x30 campaign, which aims to eliminate the 3,000,000 tons of residential waste that the city sends to landfills each year. Through tours of infrastructure facilities; lectures and conferences with leading architects and environmentalists; and other programming, Getting to Zero will raise public awareness about the architecture and infrastructure of waste and about collaborative possibilities for designing a better, more sustainable future.

NYC Books through Bars - the all-volunteer-run group that sends free, donated books to incarcerated people across the nation

Gowanus Batcave To Be Transformed into Artist & Manufacturing Space, The Powerhouse Workshop (Untapped Cities)
The project will be designed by the renown Swiss architecture firm Herzog & de Meuron, most well-known for the Tate Modern in London but whose Jenga-like skyscraper in Tribeca, 56 Leonard, is probably their most recognizable New York City work.

From 2016, but it's almost Spring, so once more: The Godfather of Brooklyn’s Feral Parrot Colony (Narratively)

And talking of Spring - The new & improved NYU Hawk Cam is back ...


Posted by onemorefoldedsunset at Sunday, March 12, 2017