I got off the bus on Columbia, & thought I might run into Eshete.  I hadn't stopped by for several months  & I wondered how he was doing, with the reclaimed land around his spot closing in, and his presence there more tenuous.  I'd seen him on Atlantic several months back.  He was looking farther out on the edge that day, maybe because the layers of clothing he was wearing were dramatically wilder than I'd seen before. Or maybe it was just coming across him in a different setting. But he was as friendly as ever.  More recently, from the B61, I'd seen him sitting at the familiar location on Columbia. The recliner, bolstered by a mattress and a number of large bags, was starting to look like a fortress. As the bus passed by, I watched him shaking what looked like a staff (a large branch?) at a passing jogger.

He wasn't there this time, nor was there any of his furniture in sight. I crossed the street & headed into Freebird books.  One of the guys there said he'd been around as usual, but we both thought maybe the cold weather was a deterrent.  I headed over to Atlantic, and coming back again by bus, an hour or two later, spotted him farther along the street, pushing his bicycle, and heading for the cat duties.  I'd catch him later in the week. 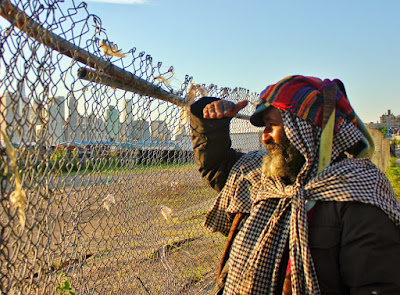 Earlier: Of the Tribe of Tiger


Posted by onemorefoldedsunset at Monday, March 06, 2017